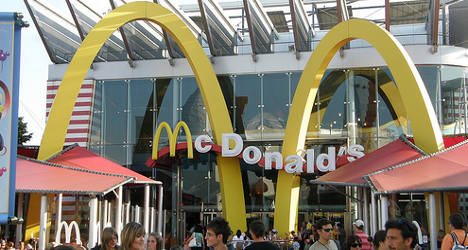 Locals in a French town were set to protest on Wednesdayto demand the opening of a new McDonald's in their town. Photo: Disney Simone/flickr

The French love for Big Macs has long been known – only in America do they eat more – but the thought of them holding a protest to demand a new outlet of the fast-food chain still seems somewhat unbelievable.

But that’s what was due to take place on Wednesday afternoon in the northern town of Saint-Pol-sur-Ternoise, where locals have become angry at delays to the opening of their new “MacDo” as they are called in France.

With construction of the new fast food outlet in the town suspended due to red tape, those hungry locals have decided to mobilise.

Around 200 were set to demonstrate on Wednesday afternoon at the site of the planned new restaurant at the entrance to the town, local newspaper La Voix du Nord reported. As the photo above shows a banner was placed on the fence around the building site to encourage fellow “Macdo” fans to turn up.

“Given the number of people mobilized, they cannot close their eyes,” said the man leading the fight Nicolas Pruvos in an appeal to local bureaucrats, who have held up the project.

A Facebook page has also been set up to campaign for the new McDonald’s and has received 4,000 likes. It’s not just burgers that the locals want. In an area of high unemployment there’ll also potentially be 30 new jobs created if the outlet opens.

As Le Figaro newspaper points out, it’s a far cry from the days when French farmer Jose Bové, an anti-globalisation campaigner, and his comrades were sent to prison for trashing a McDonald’s in the town of Millau.

The protest has baffled some readers of The Local who live nearby.

@French_Adverts @TheLocalFrance I live near this town, odd how everyone is so excited about getting their McDo but c'est la vie…

Fast-food has been on the rise in France for some time. In March 2013 The Local reported how sales of fast-food had outstripped those of traditional restaurant meals for the first time in France.

“In the land of gastronomy, fast food has become the king,” wrote French magazine Le Point at the time.

According to Business Week "France has become the chain’s No.2 market after the US, with 1,300 outlets bringing in more than $5 billion in annual sales".

And it's not just McDonald's that the French have an appetite for.

There were queus stretching out onto the street when Burger King opened a new outlet in Paris last December after 15 years away.