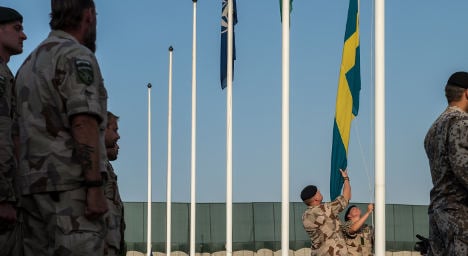 One year ago, I argued in The Local why Sweden should be proud of its troops.This rather conventional argument, at least from a US perspective, triggered a tremendous amount of responses.

Most of the people who shared my view came from our Nordic neighbours and the US. I received a letter from the mother of a Finnish soldier who explained how thankful she was that her son had served with “such professional Swedish soldiers in Afghanistan”.

Another letter had similar praise:

“Every time I’ve worked or trained with Swedish soldiers, I can honestly say that they are one of the most professional, well-trained, and most engaged soldiers in the world," a US veteran told me. "And they knew their hockey! Bless your troops.”

Interestingly enough, many (sometimes ignorant) counter-arguments I received were predominately from Swedes. More notably, most seemed uncomfortable with the notion of being proud of the Swedish soldier profession. As I uncovered containers full of ignorant comments, I realized that there are five common misconceptions about Swedish soldiers in particular that should be debunked:

1. “What’s so special about Swedish soldiers, they do not deserve any ‘cred’.”

In my attempt to explain to non-Swedes why this counter-argument is in many ways a very typical Swedish comment (i.e no one should feel better than anyone else), I had to drill down in the Law of Jante. Jantelagen is social consensus, rather than a law, which is embedded in Swedish norms and culture. Basically, it negatively portrays anyone who stands out, succeeds, or does something extraordinary. It is almost seen as inappropriate to claim that you're proud of your profession.

Since the Law of Jante doesn't always serve the best purposes, let me now point out what's actually special about our soldiers. They make sure that the civilians in conflict areas in Mali or Afghanistan are safe, they risk their own lives for people they do not know, they minesweep fields in Kosovo so farmers can plant their crops, they have protected civilians in Congo, and they have secured bus routes for the children in Mazar-e-Sharif from the Taliban who plant explosives around schools.

Equally, the "cred" should also be extended to the Red Cross nurses and doctors, the military police, and the civilians who operate in conflict areas, also risking their lives for others.

2. “Soldiers are nothing but loud hooligans”

If you were given the option to stand in a crowd of soldiers or a crowd of football hooligans, which one would you choose?

As for being loud, Swedish soldiers are not any louder than the average Swede is during the sing-along-marathons during any Swedish holiday party. The difference though is that Swedish soldiers can mimic and dance like there is no tomorrow.

3. “The profession is a male-dominated world that downgrades women”

The amount of gender-based literature and courses that Swedish soldiers and officers must read during their pre-training, and throughout their careers, compared to any other profession in society is more than any average citizen will ever study.

Swedish soldiers have a high morale on gender perspectives and they are well versed in understanding gender issues in conflict areas. Compared to the rest of the world's troops, Swedish soldiers are ahead of the game. The camaraderie between men and women in the Swedish military stems from respect and understanding.

It is also standard for Swedish troops to include a Gender Adviser on their missions. How many professions have full-time gender advisers that take part in their meetings? Also, the Swedish Armed Forces hosts a gender centre for excellence outside Stockholm, which the rest of the world has applauded with awe.

4. “Soldiers are nothing but bloodthirsty warriors.”

Yes, they are warriors. Warriors who are willing to fight for others, who want peace and stability, freedom of speech, and a democratic state where both men and women are respected and fully inclusive in society. Swedish soldiers have trained other nations' soldiers on how to support the values and freedoms we take for granted in Sweden.

5. “Swedish soldiers are a bunch of unhappy people who should get a real job.”

The happiness argument is an interesting one, worth putting in relation to non-soldiers. Unfortunately, many in Sweden and in the wealthier part of the world become temporarily happy when they get a new car, or a new house or a handful of likes on an Instagram picture of a breakfast sandwich. And these people think that they are suddenly happy. Then, the desire and hunt for more “things” or “likes” begins, which won't make you happy in the long run.

Many of the soldiers I've spoken to seem to rarely confuse the source of their happiness. Soldiers, who have seen the worst and most dangerous parts of the world, have a much different frame of reference of what it is that brings happiness. They are often content knowing that they have everything they need. They are happy and proud because their profession makes a difference to others.

Finally, Swedish soldiers are women and men who do their job even when they face enormous amounts of criticism from Swedish society.

How many other professions would put up with that? Our policy makers give them a tremendous amount of responsibility, yet Swedish society pound the troops with critique. When Swedish soldiers return home from missions, they should to feel proud of their efforts and what Dag Hammarskjöld once called "selfless service".

“…I inherited a belief that no life was more satisfactory than one of selfless service to your country – or humanity.”

– From the radio speech “This I Believe” by Dag Hammarskjöld, 1954

Maybe Veterans Day shouldn't be the only day of the year when Swedes scrap the Law of Jante and feel proud of their troops.

Annelie Gregor is a political science PhD candidate at the City University of New York. Her thesis looks at EU and US perspectives on "Limited Warfare within Coercive Diplomacy"