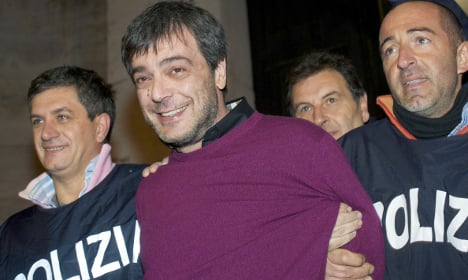 Antonio Iovine was jailed in 2010 after 14 years on the run. Photo: Roberto Salomone/AFP

In the first revelations from Antonio Iovine, a former head of the Camorra mafia’s Casalesi clan, politicians from across the spectrum are blamed for organized crime in Italy’s southern Campania region.

“I know very well the crimes with which I am stained. But the Camorra is not the only one responsible,” Iovine was quoted in Corriere del Mezzogiorno as saying.

His statements to investigators were presented as evidence at the start of the trial of Enrico Fabozzi, a former Democratic Party (PD) counsellor accused of mafia ties.

Iovine said relations between politicians and criminals was normalized in “a system that was completely corrupt”.

“The political colour of a mayor made no difference because the system operated in the same way,” he said.

The former Camorra criminal spent 14 years on the run before being jailed in 2010, with prosecutors announcing he had begun to reveal his past last week.

Operating as the mafia clan’s “finance minister”, Iovine is thought to have a key insight into the workings and key players of the criminal underworld.

Roberto Saviano, a journalist whose work has led him to need protection from the mafia, said last week that Iovine’s revelations “could change everything”.