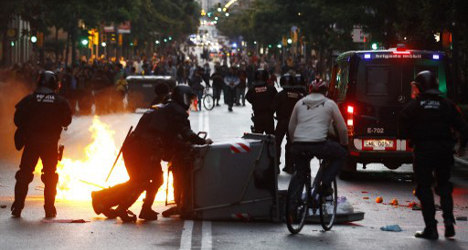 Catalan police officers try to clear the street during clashes with protesters following the evictions of activists from the "Can Vies" social centre. Photo: Quique García/AFP

Police have arrested eight people in clashes that erupted after squatters were cleared from "Can Vies", a public building occupied for 17 years by left-wing radicals in the northeastern city.

They also set fire to a mechanical digger used to demolish Can Vies.

"Six Spanish citizens aged between 17 and 47 were detained, accused of public order offences, assault against officers of the law and criminal damage" in Tuesday's disturbances, a police spokeswoman said.

She said two other people had been arrested on Monday in a first wave of riots.

Demonstrations in support of the Can Vies squatters sprang up in other neighbourhoods of the city on Tuesday and activists on Twitter called for further protests on Wednesday evening.

The house in the working-class Sants neighbourhood is owned by the city transport authority but was occupied in 1997 by activists who used it to host concerts, training courses and more.

The transport authority wants to knock it down to redevelop the area, where a rail and metro line intersect.

Police cleared the house following a court order and after negotiations broke down between the city and the squatters.