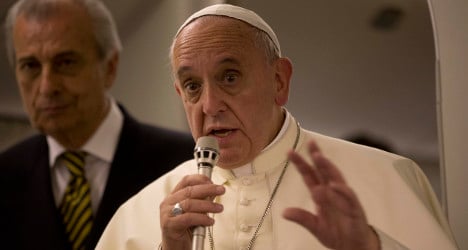 "This culture of exclusion is a very serious concern, it's an inhuman system," Pope France told journalists. Photo: Andrew Medichini/Pool/AFP

Speaking during a press conference on his return from a trip to Middle East, the pope admitted he hadn't had time to follow the European elections.

He also owned up to not being fully up to speed on issues like populism and the confidence, or lack of confidence in the Euro. But Pope Francis said he did understand words like "unemployment".

"We are living under a world economic system that has money at its centre, and not human beings. This system, to maintain itself excludes (people)," the Pope was quoted as saying by Italy's La Stampa.

"It excludes young people. In Italy I think the youth unemployment rate is 40 percent, in Spain it's 50 percent, in Andalusia it's 60 percent. There are a whole generation of people who have never worked or studied.

"This culture of exclusion is a very serious concern, it's an inhuman system," he told journalists.

The current youth unemployment rate in Spain is 53.9 percent, according to EU statistics body, Eurostat, while in Andalusia it is an ever higher 62.6 percent.  Andalusia also has the EU's highest overall regional unemployment rate, currently at 36.3 percent.