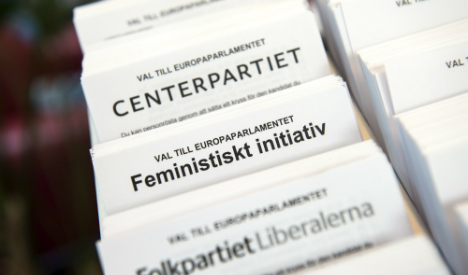 Photo: TT
The last survey two weeks ago indicated that the turnout would be around 49 percent, but the recent figures published by Aftonbladet/Inizio indicate that voter turnout may climb more than ten percentage points on 2009's figure of 45.5 percent.
"Interest has really taken off towards the end. Especially among young people," said Karin Nelsson at Inizio/Aftonbladet.
"This is the first time we have an election where social media has played a huge role, and many politicians have been good at using it," she added.
Election night stands to be the most fun for some of the smaller parties with the Green Party enjoying a recent boost in the polls and the Feminist Initiative contemplating the prospect of perhaps claiming two seats in the parliament.
READ THE LOCAL's GUIDE TO SWEDISH POLITICS
The Sweden Democrats also stand to enter the parliament for the first time according to the latest polls.
Voting booths opened at 8am on Sunday across Sweden. A record number – one million – had already voted by 10am. The election closes at 9pm on Sunday and then begins the anxious wait to see how the 20 seats occupied by Swedish candidates will be divided up.
Anyone keen to register their vote on Sunday simply has to visit their local polling station with their voting card or identification if they are unable to find it. For those outside their home municipality it is still possible to vote by making use of designated advance voting facilities. You can also vote by courier in the instance of sickness.