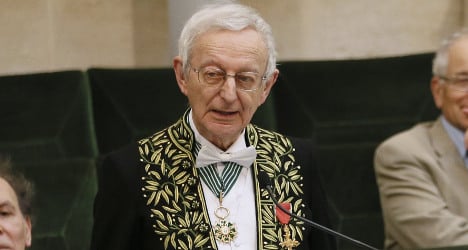 Sir Michael Edwards' election to the Académie Francais is a "revolution, an earthquake". Photo: Patrick Kovarick/AFP

Or so said Michael Edwards during his maiden address to the Academie Francaise, a hallowed body of 40 members known respectfully as "The Immortals".

"By opening the doors of your illustrious establishment, you are welcoming in its heart someone who is worse than a foreigner: an Englishman," said the 74-year-old literature professor from Barnes in southwest London.

"The British would also like to have an institution that defends the English language, especially from Americanisms," he said.

"It's an earthquake, a revolution, a Briton at the Academie," said French writer Frederic Vitoux in jest, while welcoming Edwards.

Edwards got voted into the academy on his third try.

Married to a Frenchwoman, Edwards has written several acclaimed books in French and English.

(Edwards surrounded by fellow immortals at the prestigious Académie Francaise) The bilingual academic, who has dual nationality, taught at Britain's Warwick University until 2002 and at France's prestigious College de France in Paris where he was elected to a chair from 2002 to 2008.

The academy's statutes do not contain any restrictions relating to the nationality of its members.

"French is not just another language. It's another way of understanding the world, a way of being, of sensing emotion," Edwards said in an interview after his election.

He said the French felt their language was being "invaded" by English – "a kind of Anglo-American small talk, which isn't really elegant English at all."

The academic said he fell in love with French very early on.

"My first contact with French was when I was 11," he said recalling his school days and adding: "I was gobsmacked."

He said he did not think he would be viewed as "a Trojan horse" in the academy, whose tasks include advising which new words should be entered into the French dictionary and studiously defending French against foreign impurities, especially English.

After Edwards nomination was accepted last year, fellow immortal Marc Fumaroli told The Local that the appointment of Edwards was good news for the Académie and good news for France.

"Michael Edwards is a francophone of the first order. He has a lot of talent and is very well respected here in France, and well liked," Fumaroli said. "It's not the first time we have appointed a foreigner who has chosen to adopt the French language."