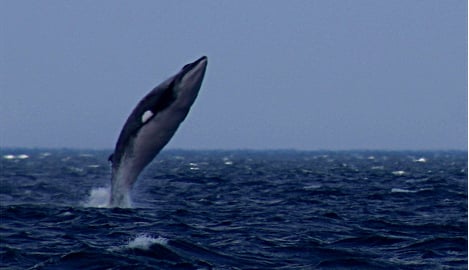 A Minke Whale breaching. Photo: Flickr/Martin Cathrae
"We have Japan as a potential export country," Elisabeth Aspaker told Norway's NRK channel. "We must see if we can work harder to promote it."
Frank A. Jenssen, a journalist and author who has written extensively on whaling, told NRK that the industry and the communities which depend on it were in crisis.
"At worst, if it does not become easier to sell whale meat, I fear that this tradition and industry will die out," he told the television channel. "In about ten to 15 years, there may be no whalers left in Norway, and that would be a tragedy."
On Sunday NRK ran a controversial whaling documentary centred on  Dina Olavsen, a 14-year-old from the Lofoten Islands, whose family has been involved in whaling for four generations.
"Many people talk about whaling without knowing what it actually is about. I am proud to be a whaler's daughter," she told the channel.
The number of whaling vessels operating in Norway has tumbled from 350 in 1950 to 23 today, meaning less than half of the whale quota of 1,300 animals was taken last year.
The industry has struggled to sell the meat in Norway, leading whale processing plants to develop new products, such as the Lofotburger, which is half whale and half pork, and whale pastrami.