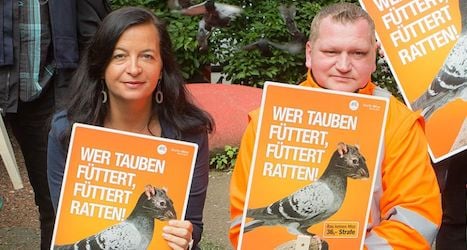 The penalty is intended to reduce the growing pigeon population, which is seen as a big problem in the city, akin to rats.

Vienna has its own 'Waste-Watchers', who have the power to levy spot fines if they see fly-tipping, pigeon feeding or even careless dog owners who don't clean up after their dogs.

Sima continued: "Feeding the pigeons is misunderstood animal welfare. Food crumbs and other human food harm the animals. They get sick and suffer."

Despite being sick and injured by species-inappropriate food, the pigeons are using the opportunity to breed beyond normal levels, leading to an excessive population.

According to Kurier, Christian Fellner, a pigeon expert from the animal welfare ombudsman of Vienna, added: "Human food such as bread or rolls is unsuitable for pigeons. In addition, rats are attracted by too much food litter."

Vienna is also engaging in other techniques to reduce the population. Scientists in the city have developed a special pigeon nesting site, where birds are attracted using pigeon psychology.

With room for up to 400 birds, the pigeons are fed species-appropriate food.  In return for a life of relative pigeon luxury, however, the pigeons' eggs are replaced with dummies, so they never breed successfully.

Vienna, like other major cities around the world, has had a long association with pigeons. The population peaked in the 1970s, but is rapidly returning to those numbers.

At the extreme end of the debate is a more definitive approach to the problem.

In 1959, the American comedian and singer Tom Lehrer released the song Poisoning Pigeons in the Park, which proved to be a massive hit.

The Viennese cabaret singer Georg Kreisler followed up with his own unique take on the song, with an original melody and German language lyrics, which many commentators find more charming.  See the YouTube page for the translations of the lyrics.

We'll leave the final words to Woody Allen, who in his 1980 film Stardust Memories called them "rats with wings".

And apologies to all the pigeon fanciers and racing pigeon fans out there. We look forward to your letters (by Pigeon Post).