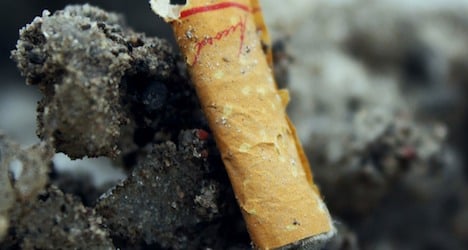 The 42-year-old man was driving in the town of Belp last Wednesday when he flicked the cigarette end onto the street, 20 Minutes reported online on Tuesday.

Unbeknownst to him, his actions were observed by a police officer.

The following evening the Bern motorist received a visiting card from the officer posted on the front door of his apartment.

“On the back (of the card) he had written that I should contact him on Monday,” the man told 20 Minutes.

“But since I wanted to know what happened I called him on Friday morning.”

The police officer allegedly told him that he would soon receive a 40-franc fine for littering.

“I do not understand why he specially went to my home,” the man said, adding that he believed the officer must have contacted his neighbours to enter his apartment building.

Police contacted by 20 Minutes declined to comment on the specific case but said that officers are empowered to notify offenders of fines even when they are not on duty.

The case also underlines the determination of authorities to keep streets in the canton of Bern tidy.

Discarding cigarette butts, scraps of paper, wrappers or even chewing gum on the ground are all punishable by a 40-franc fine in many municipalities in the canton.

Fines are even higher in other communities in Switzerland, which is generally noted for keeping its cities clean.

Authorities in Geneva struggle to keep its streets clean in the city centre, even with fines up to 150 francs for littering, depending on the nature of the refuse.