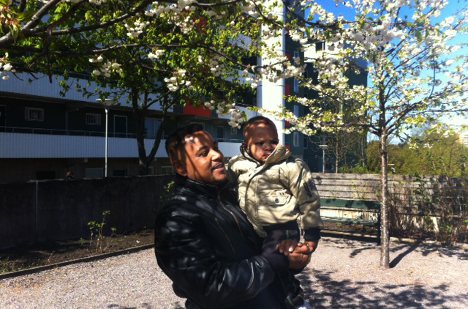 "We became visible as a neighbourhood, even to politicians," says baker Ali Safari, who peddles baklava – both Persian and Arabic – alongside Iranian cookies in an airy café right next to the tube station.

He says he and the other business owners in the northern Stockholm neighbourhood were left unscathed by the unrest last year, because most of the action took place on the cross-streets, a level down from the commercial zone.

Husby sits on a slight hill, with a pedestrian thoroughfare linking several squares, interspersed with fountains, small park areas, and, this time of year, cherry blossoms. The local church has a quote from Matthew translated to Amharic and Arabic, and a few older men wear thobes and a scattering of women of all ages wear the hijab.

But beneath the walkways are the cross-streets where people drive through the neighbourhood and park their cars. They proved a good vantage point for any would-be vandals last year.

Teenager Grace, who declines to give her real name or to have her portrait taken, says she only found out that something was going awry when a friend called her. Grace was studying, but the message on the other side of the line got her attention.

"Dude, there are fires all over Husby," her friend said.

Her classmate Amal, 14, says she heard a car window shatter on the first of six nights of unrest, looked outside, and saw the first of many fires. The Economist magazine would, once the situation calmed after a full six days, estimate the material damage to $9.5 million.

Both girls refer to the unrest not as "the riots" but as "the revolution" – sparked by the police shooting an elderly man. They said half of the vandals were youths who did not live in Husby, who instead arrived to take advantage of a break-down of law and order.

"You'd walk past one of the bridges, and someone would be throwing stuff off it, and it wasn't anyone you recognized," says Amal, pointing out that everyone knows everyone – or is related – in Husby, so it's easy to spot an outsider.

"The media kept saying 'Husby did it, Husby started it'… but we didn't do it," says Amal, who feels Husby residents have been painted as hooligans, although she adds that some of the teenagers who took part did have a political motive, and she sympathizes with them.

"We wanted to start a revolution, but it didn't go so well," she says with a laugh.

IN PICTURES: Husby residents share their thoughts one year on

"And I don't think people ever intended for it to keep going on for so long. A lot of people saw the media, they wanted to be on film, so they kept burning stuff, and burning the schools," she says and points at the school in question, a low brick building nestled between the commercial centre and a nearby six-storey apartment complex.

She and Grace say in unison that they can't give their names because there is a lot of social pressure in the neighbourhood not to say bad things about Husby. The suburb's name was loaded even before last year's unrest, says Amal, who was born in Sweden to Tunisian immigrant parents.

"To get a job, my mum had to say she was from Kista, not from Husby, because people think we are idiots."

Some Husby residents didn't even notice what was going on until the media reported on it.

"When it was happening, I only saw it on the TV at work," says Andy Menga, 47, who came from Congo ten years ago. "My colleagues asked me 'Didn't you see anything?'"

He had to disappoint them. He noticed nothing on his walk to the tube to get to work that day. And he's not out and about much, preferring to hang out at home most of the time with his family.

"I'm only out today because these two have a medical check-up," he says as sons Precieux, 4, and Joyce, 2, tear about a gravel terrace that looks down over trees and rows upon rows of austere but well-maintained red apartment blocks.

Has anything changed since the unrest?

"No, nothing, apart from a lot of people who are moving," says Menga. "They've told me that it's not a good place for children but the children in our family haven't gotten into any problem."

The teenage duo echo his sentiments.

"Nothing has changed, I still go to school, a lot of people still don't have jobs. We wanted to be heard, but they keep forgetting us," says Amal, who says she had to witness the police set two dogs on people during an altercation.

25-year-old Waka Jagne, whose family originally came from Gambia, says the police were a big part of the problem.

"If they come up to a Swedish guy or to me, as an immigrant, they act differently," says Jagne, who grew up in Husby but had to find a job elsewhere. He struggles to qualify how the police act differently, before saying it's a tone of voice thing, and an attitude thing – "They're more macho with us".

He also points out, referring to the original shooting that seemed to act like a matchstick in a gas plant, that Husby residents questioned why the officer hadn't wrestled the man to the ground, rather than shoot him – a feeling echoed by the man's widow, who called the killing an execution.

"Police brutality" or "police necessity"? Riots or unrest? Hooligans or demonstrators? Regardless, the damage caused can be summed up in numbers. In the first three days of the riot, which started on a Sunday in May, police received reports of over a hundred burning cars. Another 50 would burn after that, as well as part of a local school. Police officers and firefighters were met with hurled rocks.

Many political commentators rushed to pin the unrest on failed integration, or went even further, citing it as proof that immigration levels were untenable. Sweden's Integration Minister Erik Ullenhag disagrees.
"Husby was not directly a question of immigration and integration," he tells The Local. "There were too many people with too little hope for the future. There were too many people with too few dreams."
Almost eight percent of Husby residents aged between 20 and 24 don't have a job, the national jobs agency (Arbetsförmedlingen) told Sveriges Radio (SR) last year. The overall Stockholm average for the same age group was much lower, at three percent unemployment.
The figure might still seem low. How one counts Swedish youth unemployment can churn up national averages from 7 all the way to 24 percent. Last year's official statistics underlined one thing, however, that Husby youngsters were almost three times more likely to go without a job than the city average for their age bracket.
But, Ullenhag underscored, the area has actually gone from strength to strength.
"The Husby paradox is that it's the part of Stockholm with some of the most positive developments in employment and school results," he says. "But there are people who don't see and feel these developments. They don't have respect for the political system or society and can't find a way to prosper."
Back in Husby, bakery owner Ali says to this day that he doesn't know what the rioters wanted. In fact, few of the people out and about a year after the unrest can summon up a better explanation than a generic "just kids". Even the police said last year they weren't quite sure what the problem was.

But the solution could lie with those kids. Teenagers Amal and Grace show no fear that they will end up unemployed, like the many Husby adults who, they point out, hang out around the central square to socialize because they have no jobs to go to.

"They have to talk to the kids," Ali says, crediting the unrest for at least bringing a spotlight on the neighbourhood. "Before, not a lot of Swedes came here."

Does he not consider himself Swedish as well as Kurdish and Persian? He has lived here since 1979.

"I'm more Swedish than you are, I promise," he laughs, pointing out that Färjestad is his favourite ice hockey team and that he always supports Sweden when he watches sports.  "I always cry when Sweden loses."