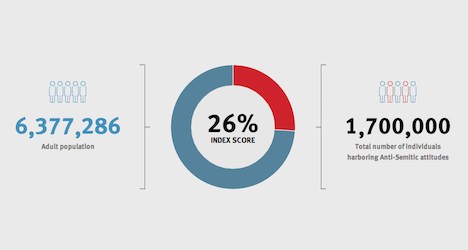 The report says that 26 percent of adults in the mountain country harbour anti-Jewish sentiments based on the results of the organization’s first ever global survey of 100 countries.

The Swiss rate compares with much lower levels of anti-Semitism in Scandinavia, with less than one in 20 Swedes, for example, judged to be anti-Jewish, and an overall average of 24 percent for Western Europe.

But it is on par with the global average of 26 percent, with the proportion as high as 74 percent in the Middle East and North Africa and 34 percent in Eastern Europe.

The lowest rates were recorded in Oceania (14 percent), the Americas (19 percent) and Asia (22 percent).

The ADL researchers classed respondents as anti-Semitic if they answered 'probably true' to six out of eleven statements classed as "anti-Semitic stereotypes" in their questionnaire.

The most commonly held anti-Semitic belief in Switzerland was that “Jews talk too much about what happened to them in the Holocaust”, seen as “probably true” by one in two respondents.

According to the results, 48 percent of Swiss believe it is probably true that “Jews are more loyal to Israel than to Switzerland”, a view held by a global average of 41 percent of respondents.

Among other issues, 40 percent of those surveyed believe it is likely that “Jews have too much power in the business world”, while 41 percent said they agreed that “people hate Jews because of the way Jews behave”.

Extrapolating from the percentage of anti-Semitic responses and Switzerland's adult population of almost 6.4 million, the ADL estimated there are 1.7 million people in the country holding anti-Jewish views.

The overall survey, conducted between July 2013 and February this year,  was based on questionnaires filled in by 53,100 adults in 102 countries with 88 percent of the world’s adult population.

The 19th century Swiss geologist Louis Agassiz was known for research into fish, fossils and glaciers, but he has also been criticised in recent years for defending racist ideas.

After emigrating to the United States in 1846, Agassiz argued for racial segregation and hierarchies, and fiercely attacked Charles Darwin's theory of evolution.

But mayor of the town of Grindelwald, Beat Bucher, disagreed with those who wanted to change the peak's name, saying: “We cannot erase the stains of history.”

In a reference to the central Swiss summit, Bucher added: “It is better to accept it with its positive and negative aspects.”

The mountain peak, at just under 4,000 metres (13,000 feet) is shared by two other municipalities, Guttannen and Fieschertal, which had already rejected a bid to rename it.

A fresh effort was made after the killing in late May of George Floyd, an African American asphyxiated by a white police officer, generated a global wave of revulsion against racist symbols.

A similar push to rename the mountain was rejected in 2007.