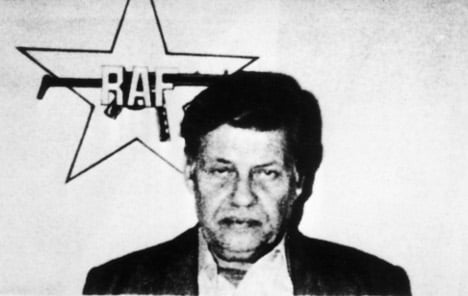 The release of diplomatic cables from the US President Jimmy Carter Administration shows previously unseen US analysis of the intense spate of far-left violence in West Germany.

Among thousands of diplomatic cables published by WikiLeaks on Thursday were dispatches from the West German US embassy briefing Washington on the RAF's kidnappings, assassinations and hijackings that year.

Over six months, the terrorists kidnapped and murdered three key public figures and, in a dramatic finale in October, hijacked a Lufthansa passenger plane and flew it to Somalia.

Their goal was to secure the release of the ten 'first generation' RAF leaders of the original Baader-Meinhof group, then being held in prison in Stuttgart, in exchange for their hostages.

Although the West German government ultimately held together in the face of public alarm and international pressure, the newly-released US cables reveal just how difficult this period was for Schmidt and how widespread international fears were over the survival of West Germany's fledgling democracy.

The terrorists' increasingly high profile actions in 1977 sowed doubts abroad and at home over the government's ability to keep the public safe, the cables emphasize.

September 1977 saw the third major incident in six months – the kidnapping of industrialist Hanns Martin Schleyer. It prompted the US embassy to warn Washington that Schmidt's government might lose control of the situation.

"Vigorous police efforts in recent months have apparently not reduced the capability of [West German] terrorists," wrote the US diplomats on September 23rd 1977. "On the contrary, terrorist activity is on the rise."

"The April murder of chief federal prosecutor [Siegfried] Buback, the July murder of banker [Jürgen] Ponto, the attempted bombing of the federal prosecutor's office in August, and now the kidnapping of [West Germany's] most prominent business figure," the embassy wrote in a separate dispatch, meant that "Chancellor Schmidt now faces the most difficult political autumn in his chancellorship to date."

A return to Weimar?

Just a few weeks later on September 23rd, a further cable shows the embassy was now concerned that failure to deal with the terrorists was ruining West Germany's reputation abroad.

Foreign observers, the dispatch said, were hysterical about the rise of neo-Nazis in West Germany and unchecked terrorism. They said this signalled a return to the chaos of the 1920s – a claim the US diplomats dismissed as "sensationalist”.

"[West Germany] is on the defensive in the face of widespread foreign and domestic allegations that German democracy is in danger," wrote the US diplomats.

"Some observers see a significant neo-Nazi movement in [West Germany] and draw apocalyptic conclusions from Germany's current experience with terrorism.

"They suggest this is a sign of a sick society, and that we are now witnessing the manifestations of a return to the paralyzed Weimar Republic."

The embassy's overall tone, however, was reassuring. "The terrorists are unrepresentative. They lack popular support or sympathy,” it said.

The West German state was, meanwhile, "fundamentally healthy," the diplomats wrote, and reinforced their belief that "German democracy is a lasting development."

A boost for Schmidt

In October, with kidnapped industrialist Schleyer still in RAF hands, the situation reached crisis point as the terrorists ratcheted up the pressure.

Working in conjunction with the RAF, members of the Popular Front for the Liberation of Palestine (PFLP) hijacked the Lufthansa "Landshut" passenger plane on October 13th.

Among their demands was the release of the imprisoned Baader-Meinhof group in return for 88 hostages on board being held at gunpoint at an airport in Mogadishu, Somalia.

A separate ultimatum was sent by those holding Schleyer, threatening to kill both him and the plane hostages if the RAF leadership was not released.

The US cables show this as a turning point for the beleaguered West German government, which gained public support by refusing to bow to terrorist pressure.

On October 18th, West German troops successfully stormed the plane in Mogadishu, rescuing all hostages and killing all but one hijacker.

The US cable from that day reflects the sudden euphoria among West Germans at this unexpected success, bolstering their faith in the German state and Chancellor Schmidt personally.

"[The successful rescue at Mogadishu] provides a major boost for the Schmidt government, whose domestic image and self-confidence have been battered in recent months by events within the Federal Republic and abroad," the embassy wrote. "Chancellor Schmidt's image as a decisive leader has been enhanced."

But Schmidt's success was fleeting.

Schleyer was found dead on October 19th, killed by his captors. On the night of October 18th, three of the imprisoned RAF leaders, Andreas Baader, Jan-Carl Raspe and Gudrun Ensslin were found dead in their in cells in Stammheim prison in Stuttgart. A fourth, Irmgard Möller, survived with stab wounds to her chest.

The deaths were officially classified as suicides, but the cables show the incident left the Schmidt government with a lot of unpleasant questions to answer – both at home and abroad.

"Initial visible relief at [the] rescue of terrorist hostages in Somalia has given way to despondency on hearing news three Stammheim prisoners have committed suicide – two with pistols, which raises questions regarding administration of the state-imposed "ban on contacts" among prisoners and outside world," reads a cable from the night of October 18th.

Suspicions had been raised that the law on isolating terrorists in captivity from the outside world had been seriously breached.

Somehow, the imprisoned terrorists had heard the news of the raid in Mogadishu and communicated with each other to form a suicide pact and they had got hold of weapons to kill themselves.

"How were they apprised of the news?" the diplomats ask in a separate dispatch. "How did they coordinate their actions; how were the pistols obtained; and how closely were they observed by guards during a critical period?

"German politicians at this juncture fear both the international and internal political repercussions – with Amnesty International, the French and Third World press having a field day on the subject of the ‘German police state’.

"Thus, one drama has ended successfully in [Mogadishu], and other dramas may be about to unfold," it concludes.