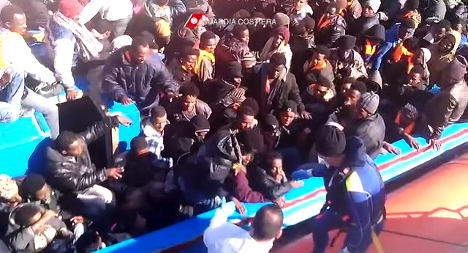 More than 800 children have been rescued from migrant boats over the past few days. AFP PHOTO/GUARDIA COSTIERA

"The systematic breakouts by adolescents are glaring proof of a scandalous and chronic lack of a system capable of protecting and supporting them," Raffaela Milano from Save the Children said in a statement.

The critique came as the government warned a surge in new arrivals could reach the record levels seen in 2011, at the height of the Arab Spring revolts.

Milano called for "immediate action" on unaccompanied minors, including "closing down structures not up to standard" and speeding up processes to reunite minors with family members already in Italy or neighbouring states.

Of the more than 800 migrant minors who were rescued from rickety boats and taken ashore in Sicily over the past few days – most of whom come from Eritrea, Somalia and Egypt – at least 500 have left their reception centres.

"The risks these boys and girls are exposing themselves to is enormous. They can end up as unskilled workers on the black market, be sexually exploited, fall into criminality," Milano said.

Save the Children said 2,370 unaccompanied minors had landed in Italy since January 1st, including many fleeing the conflict in Syria.

"Seeing the difficulties in obtaining a legal and quick reunion with relatives in Italy or Europe, and the absolute chaos which reigns in the reception centres, the minors decide to escape and tackle the journey alone," Milano said.

"The migratory pressure threatens to reach the record levels of 2011, when over 62,000 people arrived," Alfano said.

The number of asylum requests has also jumped 140 percent compared to last year: over 13,000 claims were filed in the first three months of 2014.