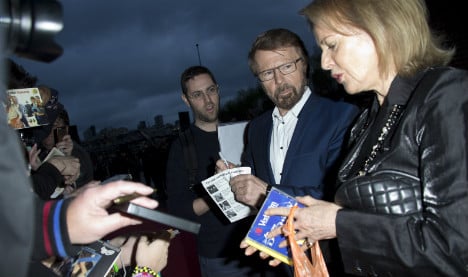 Björn Ulvaeus and Frida Lyngstad sign autographs for fans in London at the launch of Abba The Official Photo Book. Joel Ryan/Invision/AP Images

"It's difficult to talk about this because then all the news stories will be: 'Abba is going to record another song!'" Lyngstad told Britain's The Guardian newspaper.

She added; "But as long as we can sing and play, then why not? I would love to, but it's up to Björn and Benny."

Both Lyngstad and Ulvaeus were in London to celebrate the 40th anniversary since Abba won the Eurovision Song Contest. After the group's victory in 1974 they went on to huge international success, selling over 380 million records before splitting acrimoniously in 1982.

Rumours of an Abba comeback have been mooted for years but have intensified in the last six months. Agnetha Fältskog told a German newspaper last year that a reunion was something the quartet were considering.

"Of course it's something we're thinking about," she said.

Her former bandmate and husband Ulvaeus backed up that sentiment in the Guardian interview and hinted a reunion may yet happen.

"Nothing's planned and it would have to be something very special but yes, why not?" he said.

If the comeback is to happen the group will need the approval of fellow member Benny Andersson. However, Andersson has indicated in the past that he isn't keen on the group reforming despite lucrative offers to do so.

In 2000 it was reported that Abba were offered $1bn to reform for a series of concerts but turned it down.

"It is a hell of a lot of money to say no to, but we decided it wasn't for us," Andersson told Aftonbladet at the time.

Since splitting in 1982 both Fältskog and Lyngstad launched solo careers while Andersson and Ulvaeus have continued to work together, including writing the smash hit musical 'Mamma Mia.'

The foursome have only reunited twice since breaking up over 30 years ago, most recently in 2008 at the Swedish premiere of Mamma Mia.