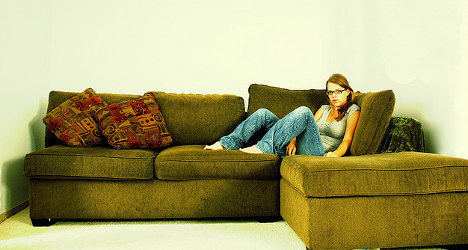 Not a common sight: Almost half of Spaniards who live alone are aged 65 and over. Young Spaniards struggle to leave the nest, let alone get their own place. Photo: Emergency brake/Flickr

Spain’s tight-knit family unit is not what it used to be, the latest study by the country’s official stats body (INE) pointing to a drop in the average number of members per household from 2.58 in 2011 to 2.53 in 2013.

As the population drops but the number of homes grows, the figures confirm that the rate of Spaniards living by themselves is indeed on the up.

Up to 4,412,000 households in Spain now only have one person living there, representing a 5.2 percent increase in just two years and more than double the figures for 1991.

That means 1 in 4 homes in Spain only have one inhabitant.

Crowded homes in Spain with five or more inhabitants, a common scenario during Spain’s 40-year dictatorship, now only account for 6.1 percent of the total.

Nearly half of the 'lone wolves', 1.8 million, are Spaniards aged 65 or older, 72 percent of whom are widows.

“The likelihood of living alone is determined by both sex and age”, which for example explains why those under the age of 55 who don’t share their home are mostly men.

In fact, one in four men aged 40 to 44 have their own so-called bachelor pad to themselves.

Despite the overall rise in single person households, most homes in Spain are made up of couples without children, almost 8 million people in total.

As for Spain’s youngsters, the trend of not leaving the nest continues.

One in three Spaniards aged 25 to 34 still live with their parents.