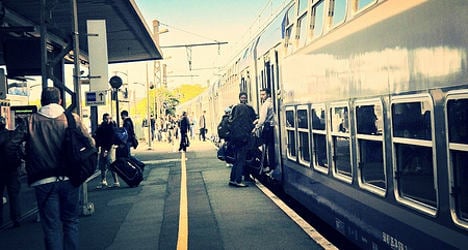 What do you do if you realise you are on the wrong train? Photo: Marsupilami92/Flickr

We’ve all got on the wrong train at some point but thankfully not many of us would take the kind of drastic action one man took in Lyon on Tuesday.

The passenger boarded the TGV at the Part-Dieu station on Tuesday afternoon but shortly after the train left the station, he realised he had made a mistake and was on the wrong one.

In a desperate bid to get off the train he pulled the alarm lever, which caused the train to immediately grind to a halt, Le Progres reported.

That then had a knock on effect on all the other trains leaving and arriving at Lyon’s main station. In all twenty other trains were delayed as a result of the man’s actions, including his own which remained stuck for over an hour on the tracks, much to the fury of his fellow passengers.

And the culprit hardly benefitted from his impulsive action. Forbidden from leaving the train, the passenger was kept on board until police arrived to forcibly remove him and take him away for questioning.

Next time he gets on the wrong train he might think twice about how to react.