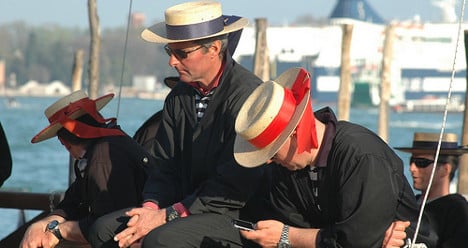 An unofficial online referendum in Veneto - the region around Venice - saw 89 percent vote for separation from Italy. Photo: RogerDavies/Flickr

For many foreigners, Italy seems to have a strong, unified identity. But its language, food culture, religion and history often blind the outsider to the fact that many Italians themselves fail to identify with the Italian state – and many are so disillusioned that they would like to break away from it altogether.

The polls tell their own story: an unofficial online referendum in Veneto – the region around Venice – saw 89 percent vote for separation from Italy. Two opinion polls in March put support for independence at 51 and 54 percent. Compare this to Scotland, where not a single poll has shown a majority for separation from the UK, and the seriousness of the challenge for Italy becomes clear. And the Venetians are not alone – Lombardy, Sicily and Sardinia all have significant independence movements.

Despite this, many ordinary people in other parts of Italy are dismissive about the various regions' pushes for independence.

“It’s all talk, talk, talk,” Massimo, who lives in Rome and works for a telecoms firm, tells The Local.

“We’ve seen it all before, especially in times of crisis, and especially with the Venetians: they seem to forget how much the rest of Italy actually helps them."

Giovanni, an engineer from the northern Italian city of Padua, agrees: “It’s totally crazy, but it’s always been the same in Italy.”

But despite facing this kind of scepticism, those pushing for independence believe they have a solid case.

In Sardinia, which has one of the highest unemployment rates in Italy, people are so disillusioned that some are only half-jokingly demanding to be made part of Switzerland, while last week Sicilian campaigners, waving banners in solidarity with their separatist counterparts, marched for independence in Palermo.

The separatists have so far been peaceful, although events in Venice almost took a violent turn last Wednesday when 24 activists allegedly plotted to ‘liberate’ St Mark’s Square with a homemade tank.

Italy only became a united country in 1861, and regional identities have remained strong ever since. Now, the lacklustre economy and huge public debt have combined with unease at the appointment of a second unelected government to further undermine the Italian state's credibility. This has given moves for regional independence fresh impetus, Giovanni Roversi, who heads up Pro Lombardy Independence, tells The Local.

“Matteo Renzi [Italy’s new prime minister], is like all the others,” he says.

“He didn’t get voted in…and I don’t think he’ll do much. The change of government has made us even more determined to take this forward.”

A similar vote to the one in Veneto is planned in Lombardy, although a date is yet to be set.

People have had enough of public money being wasted, Roversi says.

“The main problem is that Lombardy pays much more tax compared to other regions and it doesn’t get the services to match.”

Ironically, he says some of the fiercest opponents of independence are the region’s politicians. Last week, 64 regional councillors were accused of squandering €2.14 million worth of public funds on everything from premium wine and caviar to jars of Nutella and placing bets.

“Some politicians are worried about who will pay for their ice-creams,” he jokes.

He’s only in his late 20s, but Roversi harks back to an era before 1861, the year Italy was unified, as a model for his region’s democracy. Despite this he insists the plan is very much “focussed on the future”.

“Italy has always been a divided country,” he says.

“But what we want is for people to vote like they did before, for their towns, economy and politics…we want them to be able to vote for themselves and not things they can’t change.”

He also looks to neigbouring Switzerland for inspiration as it’s a country he says Lombardians “feel close to”. But unlike the Swiss, who recently voted to limited mass immigration, Lombardy’s plan will include “fully integrating” the region’s large number of foreigners, Roversi says.

“It’s not that we want to put borders up for people, we just need to be organized differently.”

Paolo Luca Bernardini, a professor of early modern European history at the University of Insubria in Como who helped organize the Veneto poll, tells The Local that “almost everywhere in Italy, there’s a strong desire to push the clock of history to before 1861”.

He firmly believes that in just four or five years' time, “Italy will be very similar to how it was before unification.”

Italy’s demise will mainly be triggered by the collapse of its bloated pension system, he adds.

“In Italy, almost half the population is on a pension…And in four to five years' time, when pensions are not being paid and when four million civil servants get a massive reduction in salary, this will be the end.”

Like Roversi, he says Italians have long been deprived of democracy.

“What we’re fighting for is to bring back the full meaning of democracy in Italy; we don’t elect our prime ministers anymore.”

“Nobody trusts this government,” he adds, and with a bleak economic outlook weighing down on them, “people are desperate.”

“Even today, I read about a young man who killed himself out of desperation…there have been about 160 suicides in little over a year.”

Bernardini visualizes a  ‘Republic of Veneto’ that would be better able to manage public spending and the widespread problem of corruption as well as make politicians more accountable.

Others beg to differ. Pietro Piccinetti is a businessman from Veneto and the founder of Comitato per il NO, a group fighting against breaking up Italy.

As the chief executive of Pordedonne Fiera, a conference and exhibition company in Veneto, he has had to lay off hundreds of staff due to the crisis, so he can relate to the frustrations with the state being felt by those calling for independence.

But he says fragmentation “is not the right path for Italy” and could set the economy back even further.

“It’s emotional, everyone is unhappy and there are a lot of anxieties…the crisis has very much destroyed the socio-economic fabric,” he tells The Local.

“But we can’t revert back 200 years. The right path is to have a federal state, with regions helping each other…solidarity is part of our culture.”

He adds that a fragmented Italy could also tarnish the country’s image abroad.

“We are global and if we want to be credible at an international level, we need to stand together.”

“People abroad love the Italian lifestyle, they love Italian products…we are ‘made in Italy’ not ‘made in Veneto’. Any division is anti-historical, it’s unusual and it’s uneconomical."

Despite wanting to split from Rome, most of the separatists visualize their regions as still being part of the EU.

Part of the vision for Veneto is for its fiscal policies "to be negotiated with Brussels", Bernardini says.

But with the European Commission warning that breakaway states would have to apply afresh for EU membership, such things may not be certain. Whatever the outcome, disillusion with the state of Italy means the independence movements will be around for a long time to come.