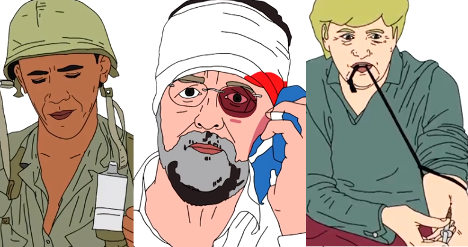 Three of the satirical images conjured up by Spanish illustrator Alberto González Vázquez, showing Obama as a soldier, Rajoy black and bruised and Merkel taking heroin.

Imagine a cartoon strip which shows Merkel as a heroin addict, Obama as a soldier and Berlusconi as a crack smoker.

They’re only three of the ‘victims’ of Amaral’s latest video, ‘Ratonera’, which ties in lyrics critical of Spain’s political elite with satirical drawings of them as society’s outcasts.

The folk rock pair from Zaragoza have moved away from their usual love ballads and centred their latest work on the general discontent of Spaniards vis-à-vis those in charge.

“I don’t even know how you sleep at night, you stupid phoney” or “Beatings, threats and broken promises, king of thieves” are just two of the condemning lines from their newest song.

“Alberto González Vázquez (illustrator) suggested that the video should portray, with humour and satire, how the ruling class are victims of a whole series of problems which in reality don’t affect them in the slightest,” Amaral explained on their website.

The end product depicts many renowned faces of Spanish politics black and bruised, homeless or as job-seeking migrants.

Amaral, also the surname of their singer Eva María, performed in front of the US Embassy in Madrid on Sunday as part of a demo to raise awareness for the shelved murder case of Spanish journalist José Couso.

He was one of three journalists killed on April 8th 2003 by American troops in Baghdad during the US invasion of the city.

Participants at Sunday’s protest are demanding the culprits be brought to justice despite an ongoing debate over whether Spain should shelve international human right cases. 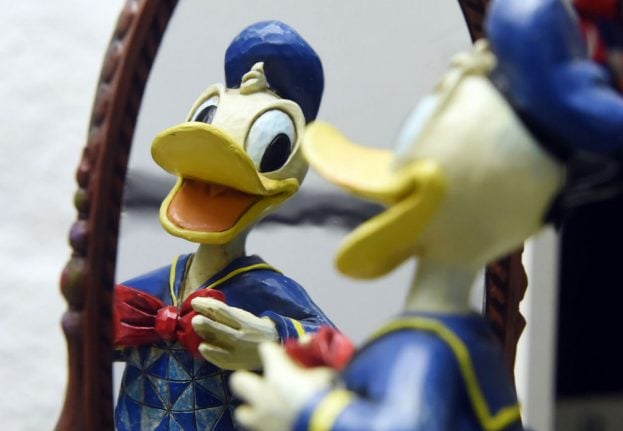 Generations of children grew up with the so-called Lustiges Taschenbuch (which translates as Funny Paperback) featuring the cantankerous Donald and family – including his rich but miserly uncle, Scrooge McDuck, who swims in gold coins, and his three mischievous nephews, Huey, Dewey and Louie.

Many adults are still hooked, and are known as Donaldists. These hardcore fans gather regularly to pore over and dissect the latest comic together, noting inconsistencies in the colourful drawings between editions or to ask probing questions about the solar system in Donald's world.

“We Donaldists assume that Duckburg really exists, and we ask ourselves questions on all kinds of details from the adventures of the Duck family, which for us are not made-up stories but factual reports,” said Alexander Poth, 46.

“All discrepancies in these reports are examined scientifically by our members, and the results are published in our trade magazine, 'The Donaldist', and presented and discussed at our annual congress,” added Poth, who encountered his first Lustiges Taschenbuch (LTB) at age two.

Poth is a member of the group D.O.N.A.L.D (the German Organisation of non-commercial members of Donaldism), which organizes the annual conference.

Not bad for a duck from across the pond, which landed in Germany at a time when the country viewed American comic imports suspiciously as potential corrupters of youth.

Even Erika Fuchs, the woman credited with popularizing Donald in Germany, was horrified when first tasked by her editor with translating the cartoon.

But she took on the job, and changed Carl Barks's fictional city of Duckburg forever.

Rather than a straight translation of the cartoons, Fuchs set them in the southern German region of Upper Franconia, complete with typical Bavarian farmhouses and bakeries.

She gave the ducks German names and Germanic manners of speaking – the elderly Scrooge (known as Dagobert in German) is the pedantic duck who knows every single German verb conjugation, while Donald swings between angry tirades and the poetic verses of Schiller and Goethe.

Fuchs “taught Donald to quack” – in German at least, said the Museum for Comic and Speech Art, also known as Erika Fuchs House, in Bavaria.

At a time when magazine sales are floundering, newstands still devote several shelves to the comic, including the latest copies, special editions and older editions.

Christian Behr, sales director at publisher Egmont Ehapa, said five million copies of LTBs are sold annually, or an average of around 420,000 a month. The 500th edition was published this week.

And around half of the readers are over 16.

“Those in the age group of over 25 make up our core readership. This group also includes our faithful collectors,” said Behr.

Bernd Dolle-Weinkauff, an expert on graphic novels at the Goethe University in Frankfurt, noted that the handy paperback format of the comic, plus the wide range of Disney cartoons proved a lasting winning formula.

But the Germans' obsession with the duck cannot be explained away by marketing, he said.

“It's not a question of marketing but perhaps a question of a particular kind of mentality in Germany. That should be investigated,” he said.

“In contrast to Mickey Mouse, Donald Duck is the forever unlucky ducky. He's a loser, but also someone who never gives up,” said Dolle-Weinkauff.

“People are keen to see how he always manages to solve his problems, and what crazy ideas he comes up with.”

In fact, Donald is “exactly the opposite” of the “foreign conceptions of the German mentality – of these Prussian officials, soldiers, disciplined people who are always orderly,” noted the professor.

“So this stereotype of Germany stands corrected here. I think that needs to be acknowledged. Because he (Donald) won't be so well-liked. In any case, Germans view themselves differently,” he said

Poth, who has a collection of more than 700 LTBs, agreed that Donald's often ruffled feathers draw readers.

“He's not perfect and that's what makes him so likeable for us, and we often laugh about ourselves when we laugh about Donald Duck,” he said.

“Mickey often comes across as the know-it-all. And that's just not popular in life as it makes people envious,” Poth added.

“We feel better next to Donald, because we simply come out better than when we're put next to Mickey.”