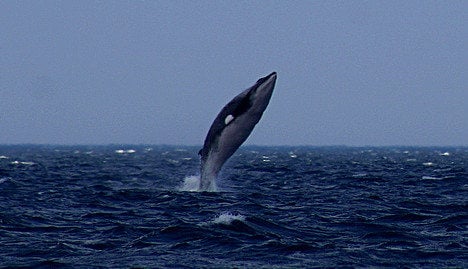 A Minke Whale breaching. Photo: Flickr/Martin Cathrae
"This year too, we have decided on a quota which guarantees continuity and a good framework for the whaling sector," Fisheries Minister Elisabeth Aspaker said in a statement.
Norway formally objected to the 1986 commercial whaling moratorium and does not consider itself subject to it.
The Scandinavian kingdom and Iceland are the only countries in the world to hunt whales for commercial purposes.
Both nations argue that the whale species they hunt have a sufficiently large population to not be endangered.
The announcement came the day after the whaling industry suffered a serious setback: the International Court of Justice ordered Japan to end its annual Antarctic whale hunt of fin whales, a larger species than the Minke whale Norway catches.
The United Nations' Hague-based court said that the programme was a commercial activity disguised as science and that most of the meat ended up on supermarket shelves.
In Norway, where whale meat used to be considered a poor man's dish, whalers struggle to reach the quota: in 2013, only 594 whales were harpooned according to official data.
Animal rights activists say this is a sign of the consumers' lack of interest.
"Year after year, the quotas aren't reached and this new quota is unnecessarily high," Greenpeace Norway head Truls Gulowsen told AFP.  "But that's not a big problem: it's a dying industry, because consumers prefer pizza to whale meat."
Whaling professionals argue they do not reach the quota due to the whale meat processing plants' lack of capacity, high fuel prices and distant hunting areas.
The hunting season goes from April 1st to September 30th.