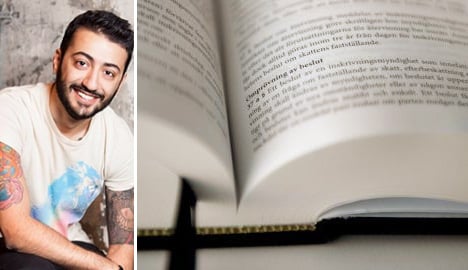 Kawa Zolfagary and an excerpt of a Swedish law text. Files: Private, TT

Yet another court verdict in a rape case that sets the assailant free despite the assault being a fact. Again by saying that the man did not know what he was doing.

There is a war on women in Sweden.

A 16-year-old boy threatens a 15-year-old to make her give another boy oral sex. He shoots her several times with an air gun, with several other young men present, and the Norrköping district court does not doubt the girl when she said felt forced. But no one was convicted. Because it could not be proven that the 16-year-old boy knew that the girl felt forced.

In other words, her feelings are irrelevant, as long as the young man assaulting her didn't understand her feelings.

I've lost count of all the examples when men have walked free simply because they are presumed dumb enough for their defence to hold:

"They didn't realize she was drunk."
"He didn't realize her no was meant seriously."
"The man didn't understand that consenting to one thing did not mean she consented to that other thing."

Trial after trial, the rapist walks free because he didn't understand when he crossed the line. Barely a week goes by without another case and each time I, and many others, lose faith in the Swedish justice system. Now yet another verdict has been added to the already far too big pile.

What hurts the most, apart from the courts ignoring the woman's right to her own body, is the continued view of men as complete idiots. Lay judges, judges, and lawyers seem to think that men are totally incapable of understanding when consent has not been given.

In this latest case, a 16-year-old should understand that he has created a threatening situation when he shoots someone with a soft-air gun. In two years time, he will be an adult, he'll have the right to vote. He's almost already an adult. Sure, a lot can happen in those two years, but surely such fundamental knowledge should have been acquired before then?

What is very worrying with all these cases is how they affect whether people report assaults to the police. If you over and over see verdict after verdict where people walk free, you hardly want to go through the same thing yourself. It is not an unreasonable assumption that these verdicts contribute to concealing the real breadth of the problem.

It's already difficult to report assault to the police because you know you'll be treated like a suspect and have to endure offensive questions, like what clothes you were wearing.

There are people who want to make the rape law stricter and get at the problem that way. But this is about more than the law.

We have to change our norms and attitudes, the ones that make it possible for a boy to threaten and force a girl to give oral sex, the same norms and attitudes that make the justice system disrespect a woman's right to her own body.  They are the norms and attitudes behind the assumption that men aren't capable of understanding when consent has not been given… that we are animals, that us men only act upon our most basic instincts without the capacity to read other people.

The strongest hatred of men I've ever seen comes from the patriarchy itself.

There's a name for this phenomenon, when a woman's clothes are interpreted as a yes to intercourse, where a man needs to understand that he is doing something wrong to be found guilty. This phenomenon that paints men as monster and women's bodies as public property. It's called rape culture. It's the number one weapon in the war on women. And it's a war where the men are also casualties.

Writer Kawa Zolfagary founded the Violated White Men (Vita Kränkta Män) Facebook page where he collected tidbits of white men feeling violated, injured and/or insulted by, for example, too many immigrants on TV.

Editors's note. The article was amended at 11:26am to clarify that the teen faced charges of sexual coercion.