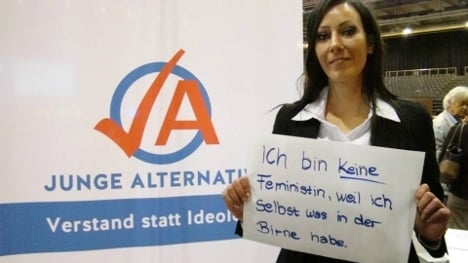 The campaign, entitled "equal rights, not levelling," invites young men and women to post photos of themselves holding up signs explaining why they reject feminism.

One woman wrote "I'm not a feminist because I like doors being held open and being helped into my jacket."

Another posted a picture  of herself with a sign reading, "I'm not a feminist because equal rights have already been achieved, now women just need to seize their chance!"

CLICK HERE to see some of the anti-feminist posts

In another photo, a young couple hold up a sign that reads "we're not feminists because we don't need to be made the same in order to be equal."

The AfD, a party founded in 2013 to call for Germany's withdrawal from the Euro, has increasingly veered toward social conservativism.

Christians have founded their own "circle" in the party and Beatrix von Storch, a former FDP polician known for her opposition to abortion and same-sex partnerships, has risen to prominence.

The Baden-Württemberg wing of the party has also criticized the state government's sexual education policy for its attempt to normalize same-sex relationships.

The Facebook page of the young AfD explains that the campaign is meant as a response to the young Social Democrats, who posted photos supportive of feminism to mark international women's day.

One common theme that recurs in many posts is opposition to women quotas – an issue taken up by Germany's "grand coalition" government who plan to introduce a law requiring that women make up 30 percent of members on company boards.

The moderator of the young AfD Facebook page notes that the campaign has received great support from "working women who want to follow their path without quotas and who don't want to be degraded into needy beings by feminism."

Even a member of the Baden-Württemberg party leadership has chimed in.

Markus Frohnmaier, who is also the chairman of the state's AfD youth wing, posted a picture of himself with a sign that reads, "I'm not a feminist because the artificially stirred up battle between the sexes distracts from the real problems of this country."

But groups fighting for equality are adamant that discrimination still is a "real problem" and that feminism still has relevance in Germany today.

Birgitt Purschke, a representative of the German Women's Circle, told The Local feminism had achieved a lot over the past few decades.

She said equal rights had not been attained, pointing to the gender wage gap that continues to exist in Germany and to the "glass ceiling" that many women encounter over the course of their careers.

Purschke stressed feminism is about equality, not just for women, but also for men.

If young women are coming out to oppose feminism it is because they have not yet begun to encounter the disadvantages that await them in later life, she said.

"In youth and school years women experience less inequality, this becomes increasingly palpable in work relations, when they have children or under other life circumstances." The photos have generated a great deal of discussion between supporters and opponents.

One young man explains that he isn't a feminist "because family is more important than career, and I want to stop the gender madness!"

A comment on Facebook asks whether he values family so much that he would be willing to give up his career to stay at home with the kids.

A supporter of the campaign replies that this would be a foolish idea since men in Germany earn roughly 25 percent more than women. Without quotas, the family could decide for themselves, and would certainly make the "rational" decision.