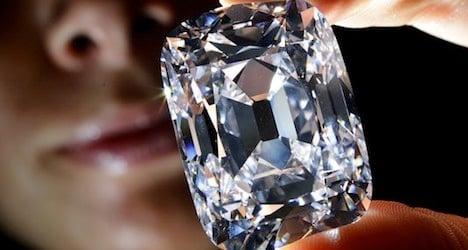 The diamond shown above is not the one reported missing. Photo: Fabrice Coffrini/AFP/File

Prosecutors ordered a probe after a South African-Guinean diamond trader, Sylla Moussa, filed a complaint in September claiming the 50.66-carat pink diamond he had been keeping in storage with Malca-Amit had vanished, public broadcaster RTS reported.

Police in mid-March searched the Geneva premises of the company, which offers transport and storage services for gems and other valuables, and placed three of its administrators under investigation, according to the report.

The highly-respected company could not be reached immediately for comment.

A company lawyer, however, said in an email to RTS that Malca-Amit flatly denies Mr. Moussa's allegations.

"The company is cooperating fully with the authorities in order to dissipate any (suspicions) it participated in any illegal acts".

Moussa, who runs his company Sylla Diamond International (SDI) out of Johannesburg, placed the large, rectangular diamond in storage with Malca-Amit in 2007 as he waited to sell it for the best possible price.

But when he wanted to see his gem last August, Moussa says he was told it had been transferred to a South African businessman he had been dealing with and who he, according to his complaint, believes was the mastermind behind the crime, RTS reported.

That transfer, he lamented, happened despite a storage agreement he signed with Malca-Amit on August 16th 2007 stipulating he was the only owner of the rock.

"I have been in Geneva for six months and I will not leave until I have found my diamond," he told RTS.

Malca-Amit's lawyer told the broadcaster the company was considering filing its own suit against Moussa for making "libellous accusations", insisting a storage agreement existed proving the diamond trader had in fact picked up his jewel on April 29th 2008.

RTS said it had obtained a copy of that contract, which carries the same bar code and contract number as the contract Moussa keeps in a Swiss safety deposit box.

However, the deposit dates on the two documents differ by 13 days, and Moussa insisted the second was "a crude forgery".

Adding to the mystery, RTS pointed to an email dated January 22nd 2013 with Malca-Amit's former chief stating Moussa could access his diamond at the company's storage facility during office hours.