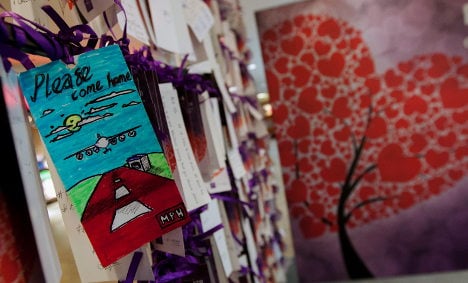 The airline and relatives of the missing passengers will be paid, a spokeswoman for the firm said on Wednesday in Munich, confirming a report in the Handelsblatt newspaper.

The plane, with 239 people on board, has been missing since it disappeared from radar screens on the night of March 7. It departed from Kuala Lumpur en route to Beijing, China.

Allianz is the main party of a consortium which insured the Malaysia Airlines fleet, the Handelsblatt said.

Aviation insurance policies usually include a tight time schedule of when payments have to be made to prevent disputes after an accident, which would damage the image of insurers.

The total sum to cover the missing jet is said to be more than $100 million, although this was not confirmed by the Allianz spokeswoman.

The jet has still not been found.

READ MORE: Iranian on Malaysia plane was going to Germany 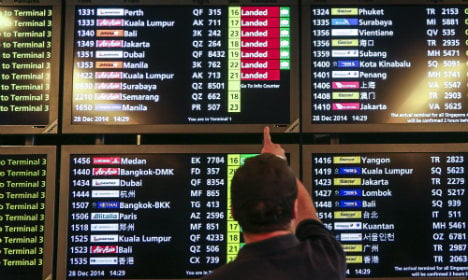 An arrivals board tells customers to "Go to info counter" at Singapore airport Photo: DPA
German insurance giant Allianz confirmed on Monday that the firm is the main insurance comapany for AirAsia, the operator a plane that has been missing since Saturday.
"We can confirm that Allianz Global Corporate & Specialty UK is the lead reinsurer for AirAsia, for aviation hull and liabilty insurance," a spokesperson said in a statement.
"It is much too early to comment on reports of this incident at this stage, except to say that our thoughts and prayer are with all those affected by this missing flight."
Multinational teams searched Monday for any signs of the Airbus 320-200 jet more than a day after  Flight QZ8501 disappeared over the Java Sea with 162 people on board.
BBC reported that recovery crews are now focussing on an area where an oil spill had been spotted by the Indonesian air force, though it was not clear if it had come from the missing plane.
The plan lost contact an hour after take off en route from Surabaya in Indonesia's east Jave to Singapore on Sunday after the crew requested a change of flight plan due to stormy weather.
The head of the search and rescue team told the press on Monday that QZ8501 was likely "at the bottom of the sea".
It's means that Allianz could be on the hook for another hefty payout, as the latest disapearance marks the end of a disastrous year for Malsian aviation.
Malaysia Airlies Flight MH370 disappeared while flying from Kuala Lumpur to Beijing in March with 239 passengers and crew. In July, MH17 was shot down over troubled Ukraine, killing all 298 passengers and crew.
Allianz was also the lead insurer on this planes.
"We stand by to support our clients as fully and quickly as possible, working in conjunction with the insurance broker and our co-reinsurers," Allianz's statement read.
The insurer has already seen a drop in stock prices by 1.4 percent since trading began at 8am on Monday.
AirAsia is the region's biggest low-cost airline and has, until now, had a spotless flying record since its founding in 2001.
SHOW COMMENTS
Url copied to clipboard!