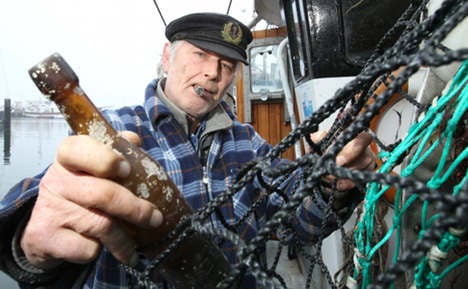 What initially looked like a normal, discarded beer bottle, nestled among fish in the Maria I's nets, turned out to be a record-breaking find – as it contained a postcard dated May 17th, 1913 written by a man named Richard Platz.

A modest Danish postcard with two German stamps on it and a polite message asking the finder to send it on to his address in Berlin; it appears that Platz could have been trying to save on international postage fees.

But the card never arrived, instead landing in the hands of fishermen from Heikendorf in Schleswig Holstein, on Tuesday – over 100 years later.

“I had it in my hand, but then a colleague told me there was something in it,” skipper Konrad Fischer told regional newspaper the Kieler Nachrichten, explaining he was ready to throw it back into the Baltic.

“When I saw the date I got really excited,” he said.

Until now, the oldest message in a bottle listed in the Guinness Book of Records was 97 years old when found in 2012, making Fischer's a potential record breaker.

“If the message is really this old, maybe a museum would be interested,” said Fischer, who will be taking his bottled post to experts for them to take a closer look.

Fischer has been a fisherman for 50 years and in that time has found mines, bombs, torpedoes and a corpse in the sea.

He told news agency DPA that he was not sure yet what he would do with the bottle but would "maybe auction it to the highest bidder".