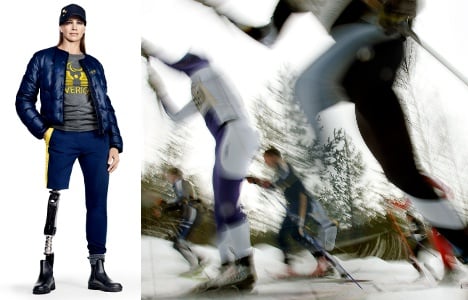 At the age of 14, Ripa complained of knee pain to her school nurse.

"It wasn't so bad in the beginning, but the pain and the swelling got worse and worse," Ripa recalls on her training blog. "'You've strained it, it's an inflammation', the school nurse said."

Ripe was sent to a specialist, which in the end led to an amputation at her right knee. It would take another ten years for her to be given the all clear from the osteosarcoma, or cancer of the bone.

"I only remember fragments from the time following the amputation," she writes. "The prosthesis that I detested, Birgitta at the Red Cross walking school who was so strict, the foreign girl who walked so beautifully with her prosthesis."

Ripa took to the swimming pool and would end up competing both nationally and internationally. In fact, travelling to Sochi for the Paralympics is not Ripa's first Olympic outing – she competed as a swimmer in the Barcelona Summer Olympics in 1992, just six years after the amputation.

Eventually, problems with her left knee meant she had to give up her swimming career. Ripa instead headed to New York to work as a nanny. She went on to study textile design and, upon her return to Sweden, ran a couture studio for seven years. Today, she works as a graphic designer when she's not training six to eight times a week.

Ripa was introduced to cross-country skiing late in life, but once the introductions were over, she was hooked enough to give it a professional stab.

"Cross-country skiing opened up a whole new world," she writes on her blog. "To make your way in snow, which isn't usually much fun or very easy with a prosthesis, was a powerful feeling."

If she went too fast in the beginning, her training partner would slow her down by pulling on a rope she'd tied around her middle. The dream, once things started to heat up, was to make it to Sochi for her Winter Olympic debut.

Her last blog update, posted from a training camp in the Italian Alps, was simply entitled: