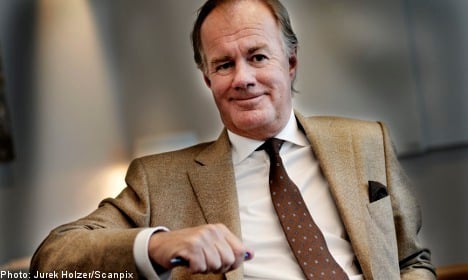 Stefan Persson came in at number 12 in the 2014 Forbes ranking, with an estimated fortune of around $34.4 billion. It marked the second year in a row he has finished 12th.
The 66-year-old's fortune rose by $6.4 billion since 2013, a boost that Forbes noted was largely thanks to a 25-percent surge in the clothing giant's stock price. The Swede also was busy adding to his property portfolio with a home in the English countryside.
The only other Swede to sneak inside the top 100 list was 87-year-old Hans Rausing of TetraPak fame, who boasted a wealth of $12 billion. Thanks to a gain of $1 billion to his name, Rausing jumped two places on the list to 94th. Forbes noted that Rausing resides in East Sussex in the UK, stands 203 centimetres tall, and speaks fluent Russian.
The next highest placed Swede was Antonia Ax:son Johnson at 153rd place with a fortune of $8.5 billion. She heads the Axel Johnson Group, which has interests in everything from energy to telecom and real estate.
Ikea founder Ingvar Kamprad, who placed as high as 11th back in 2010, ranked 367th this year together with his family with an estimated fortune of $4.1 billion. Kamprad announced in June that he was stepping down as chairman and handing over the reins to his son Matthias.
Also appearing on the list were Fredrik Lundberg, head of LE Lundberg Företagen; Melker Schorling, the chairman of Melker Schorling AB; security industry mogul Gustaf Douglas, as well as hedge fund operator Thomas Sandell. Self-made education billionaire Bertil Hult featured for the third year in a row, coming in at 375th place.
American IT mogul Bill Gates topped the list yet again with an estimated $76 billion to his name, a spot on the list he has enjoyed 15 of the last 20 years. To see the full list, click here.