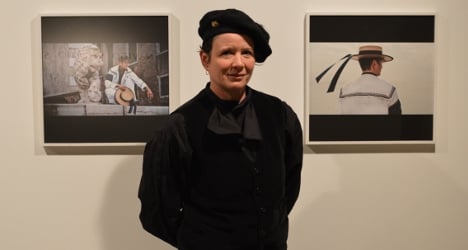 Not so for Alex Hai. Born in 1960s Hamburg, he studied film in San Francisco before a research trip to Venice led to a dramatic career shift.

“It was not really my plan…it was like destiny,” Hai told The Local at Venice’s Jarach Gallery, during an exhibit of photographs showing Hai at work.

“A film production offered me some research work and sent me here, then everything turned in a different direction,” he says of his trip to Venice 18 years ago.

“I wanted to see the gondolier’s perspective of the city…while I was doing that, the gondolier offered for me to become one,” Hai remembers.

A strong rapport with a progressive gondolier will only go so far, however.

Hai took up his offer and began training at one of Venice’s gondolier stations, but failed the exam to gain a license.

“Those people who were positive [about me becoming a gondolier] all got kicked out just before I did my first exams,” he says.

“At first, I thought it was maybe my fault, but then I realized it had nothing to do with the skills.”

Hai repeated the exam unsuccessfully and the gondolier’s association contested his suggestion of prejudice. Despite not gaining a licence he began working privately for a hotel, touring guests around Venice, which was allowed legally but had not been tried before.

Hai’s new-found employment caused waves in the city’s waterways, leading to a court battle over his right to work privately. He won the case in 2007 and has been paddling tourists through the city ever since.

Despite describing the life of a gondolier as “magical” and “like poetry”, Hai admits to having “good days and bad days” on the water.

“One of the most difficult things to learn is your physical capability for the day…At the beginning you can get exhausted very quickly without understanding where it’s coming from,” he says.

It takes about an hour to bail out a rain-filled gondola and high winds can make for a stressful journey, according to Hai.

“It’s a very technical affair…you can compare it to playing the violin,” he says. “It’s something very precise which you need to do over and over again in order to get fluid.”

Even after years in the job, Hai says concentration is essential, especially in the crowded canals; in August, a German tourist died after the gondola he was on collided with a waterbus.

But despite such worries, Hai says he still loves his job. “The most enjoyable part is being constantly reminded by my clients how beautiful this city is; they always find something new to ask me or see something I haven’t seen before,” he says.

After early setbacks, he says he has now been accepted by many of the Venetians in the trade and predicts more women will soon be picking up gondola oars.

As immigration to Italy continues, Hai muses that the canals of Venice could soon be opening up not only to women but a wealth of other nationalities. “For sure, we’re going to have some Asian people doing it in the future, because they’re living here now,” he says.

According to Hai, to suceed they will need “a lot of training – and determination”.

Editorial note, June 2017: This article was first published after an interview with Alex Hai in March 2014 under the headline 'The foreign woman riding Venice's waterways'. On June 21st, 2017, Hai released a statement for the press, which can be read in full here, confirming that he was transgender. The article has been updated to reflect Hai's gender and correct pronouns.

By now, most regular visitors to Italy know better than to do things like bathe in fountains, wander the streets and piazzas in revealing swimwear, or pocket pieces of the local monuments. All of the above could land you with a hefty fine.

But while the above rules might appear fairly obvious, over the years a number of Italian destinations have introduced more eyebrow-raising bans, mainly in the name of preserving ‘decorum’.

Venice, the crown jewel of northern Italy, in particular boasts a rather lengthy list of “forbidden behaviours”, aimed at “preserv[ing] urban cleanliness and landscape, and also for reasons of safety and public hygiene”.

Now, if you’re thinking that these measures are the urban equivalent of a scarecrow and are only in place to ‘frighten’ visitors into respecting the city, think again.

The regulations are enforced day in and day out by local authorities, and those flouting the rules do receive steep fines – as in the example of two German backpackers fined a total of 950 euros in summer 2019 after being caught making coffee on the Rialto Bridge.

So here’s a quick look at what NOT to do to avoid getting in trouble while visiting Venice.

While these aren’t legally enforceable, flouting the following unspoken rules could incur the wrath of the locals – something that could be far more unpleasant than a fine.

You may have heard that wheelie suitcases are banned in Venice, but in fact you can safely bring them to the city. A ban on dragging luggage through the streets was proposed in 2014 due to the noise, but it was never enacted.

That doesn’t mean residents will appreciate being woken by the sound of your rolling luggage rumbling through the calli, so refer to the unofficial rule above and take care if you arrive late at night.