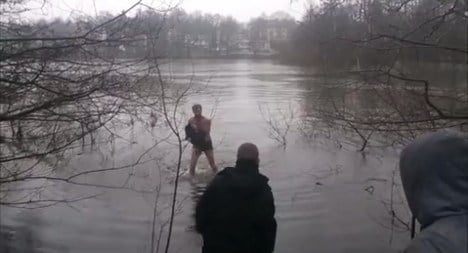 Photo: YouTube screenshot
On a grey and rainy day in eastern Sweden, Kenth Rehn, 38, leapt into ice-cold water and saved a duck that was caught on a fishing hook.
Local fishermen in Norrköping had accidentally snagged the wild bird and realized they either had to cut the line and hope for the best or swim out to save the duck.
Rehn, who was passing by, didn't hesitate to make the choice and took matters into his own hands.
"Next time it could be a person in distress… so I figured it's best to be prepared. I took all my clothes besides my underwear and jumped in," he told The Local.
SEE THE VIDEO HERE
Describing himself as a friend to the animals, the 38-year-old swam out about 20 metres to the duck and then brought it back to safety. On the shore, the fisherman untangled the bird's wing, cut out the hook, and released the duck, which flew away.
Rehn estimated the water was about 5C, adding that it was "bloody horrible" weather at the time.
One of the witnesses on the shore filmed the incident, and uploaded it to YouTube at the end of last week, together with a dramatic and somewhat heroic score. The clip has since been viewed over 15,000 times.
When asked if it was embarrassing to be seen half naked by so many people, the humble and heroic Swede could only laugh.
"Ah, what the hell, it's no problem. I'm not ashamed about my body," he told The Local.
The video ends with a shot of the Swede doing jumping jacks as the duck flies off to presumed safety and witnesses chuckle.
"It was so bloody cold in the water," Rehn said. "I had to do something to warm up as quickly as possible."
Editor's Note: The Local's Swede of the Week is someone in the news who – for good or ill – has revealed something interesting about the country. Being selected as Swede of the Week is not necessarily an endorsement.