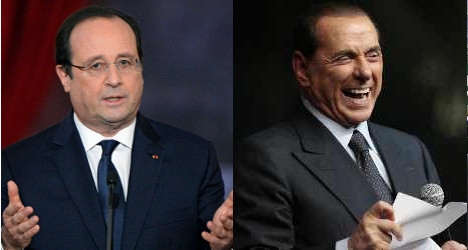 More than one in two men – 55 percent – from Italy and France admitted to cheating on their partners, along with one in three women.

The poll by Ifop, released on Wednesday, suggested a link between bed-hopping and religion, saying there was less evidence of cheating in "majority Protestant" countries.

Only 42 percent of Britons and 46 percent in Germany admitted to having an affair at some point in their lives.

Italian leader Silvio Berlusconi, who was last year convicted of paying for sex with an underage prostitute at one of his infamous "bunga bunga parties", is "ultimately quite representative of their respective nations," said Ifop director Francois Kraus.

The poll also comes just a few weeks after "le scandale" in France, when President Francois Hollande was snapped leaving the home of actress Julie Gayet, on a scooter.

The photos led to the collapse of his relationship with long-time partner Valerie Trierweiler and a torrent of worldwide comment about French attitudes to fidelity.

Infidelity is most evenly distributed between the sexes in Germany, where 43 percent of women admit to having had an affair. That compares with 34 percent in Italy, 32 percent in France and 29 percent in Britain.

The more disciplined couples of northern Europe are not complete angels, though.

Some 53 percent of Germans and 50 percent of Brits have exchanged an illicit kiss, compared with 46 percent in France, Italy and Belgium.

But it is the French that remain the most casual about flings, with 35 percent saying they may cheat in the future, against 31 percent of Germans and Spaniards, 28 percent of Italians, and a quarter of Brits.

A total of 4,800 people aged 18 and over were quizzed for the poll across six Western Europe countries.

SEE ALSO: Five reasons to date an Italian (and five not to)