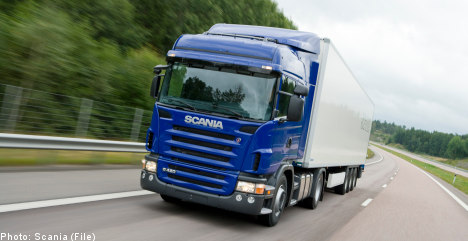 Volkswagen currently has nearly 90 percent of voting shares in Scania, and owns 62.6 percent of the company.

It is telling shareholders of the outstanding stock it is willing to pay them 200 Swedish kronor (22.24 euros, $36.84) per share, a premium of more than 50 percent that values the total offer at 6.7 billion euros. The buy is conditioned on Volkswagen ending up with at least 90 percent of Scania. If that happens, the German group will withdraw the listed Swedish firm from the Stockholm stock exchange.

Volkswagen already owns German truck- and bus-maker MAN. It bought into Scania in 2000. Taking full control of the Swedish company, it reckons it will make annual savings of 650 million euros through synergies.

The German group used the Scania announcement also to reveal its 2013 results, which were not expected for another three weeks. Volkswagen's net profit last year sank 58 percent to 9.1 billion euros — a forecast dip brought on from its integration of Porsche into the group in 2012.