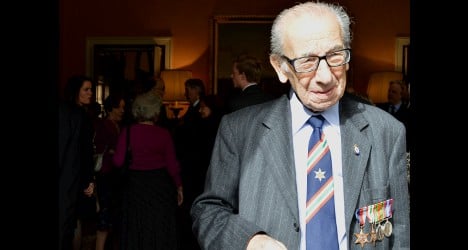 Harry Shindler at the residence of the British ambassador to Italy. Photo: Rosie Scammell

Shindler has for more than ten years fought to reclaim his right to vote, which he legally lost after living outside of the UK for 15 years. He has taken his battle to Brussels, prompting the European Commission last month to call on the UK to restore one of its “fundamental political rights”.

But despite the European Commission’s statement, the UK is under no obligation to change its law, prompting Shindler on Wednesday to say he had reached “the end of the road”.

“Only those who lose the right to vote realize how important it is,” he said in Rome, appealing to those expats that have lived abroad for less than 15 years to get out and vote.

“While there is a low percentage of people using their vote, this is being used against us, to say that we’re not interested in voting,” Shindler added.

In order to get the necessary consensus in UK parliament to change the law, allowing expats such as Shindler to be able to vote again, Brits who have been abroad for less than 15 years must go to the polls.

“See if we can push up the numbers of those who can vote,” he said.

The British ambassador to Italy, Christopher Prentice, recognized that Shindler has raised “considerable support in the UK and EU for this objective” to reclaim the right to vote.

Presenting the MBE in Rome, Prentice praised the “exceptional contribution” Shindler had made “to the rights of British expats in Italy” over more than 30 years.

In addition to Shindler's lobbying for the vote, the ambassador celebrated the work of the “veteran campaigner” to “keeping the memory alive of British servicemen who fought and died to liberate Italy in World War Two.”

Shindler took part in the Anzio landings in January 1944 as part of the British Army, staying in Italy until the country was liberated in 1945.

Since returning to Italy three decades ago he has worked to help British families locate the graves of their relatives who died during the Second World War, as head of the Italy Star Association for British veterans.

One such family member is Roger Waters, the founder of the British rock bank Pink Floyd, who yesterday unveiled a monument to his late father after receiving help from Shindler.

PARTNER CONTENT
Six reasons why international health insurance could give you peace of mind – now and in the future
Url copied to clipboard!