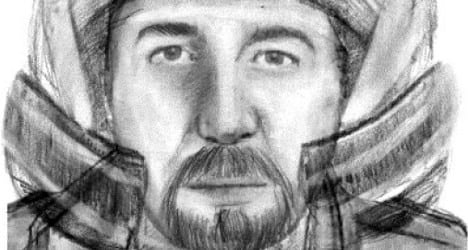 The police sketch of the suspected Alps murderer that led to the arrest of a former French cop this week. Photo: Police image

Hopes of a breakthrough in the mysterious 2012 murders of a British-Iraqi family and a cyclist in the French Alps were dashed Wednesday as officials said a man in custody seemed to have no link to the case.

"At this time, there is no obvious link" with the murders, Annecy prosecutor Eric Maillaud told a press conference, adding that the 48-year-old man, who remained in custody, was also suspected of arms trafficking.

Saad al-Hilli, 50, his wife Iqbal, 47, from Surrey and grandmother Suhaila al-Allaf, 74, who lived in Sweden, were all gunned down in their car on September 5th on a quiet

road not far from the town of Annecy.

The man, arrested in the area on Tuesday, remained in custody for questioning, Maillaud said, adding that he was suspected of being involved in arms trafficking with an accomplice.

Maillaud said a second person close to the arrested man had been detained on Tuesday night after "trying to flee".

The ex-policeman was detained on Tuesday in the first arrest in France in the case. Sources in the investigation had expressed caution over his possible involvement in the murders.

"put him in the zone at the moment" of the murders of the al-Hilli family and the cyclist on September 5th 2012.

Several arms were reportedly seized at a raid in the man's home that revealed his passion for guns. Another raid was carried out on a house in the nearby village of Lathuile.

Ballistic tests will be carried out to determine if these weapons had been used.

It was the police sketch, seen below, of the mysterious motocyclist seen near the scene of the murders that led to the suspect being arrested on Tuesday.

But on Wednesday prosecutor Maillaud said neither the murder weapon, the motorbike or the helmet had been found in police raids.

On Tuesday one source close to the investigation told AFP the suspect was a "taciturn mountain man" and a gun enthusiast who "lives on the fringes of society".