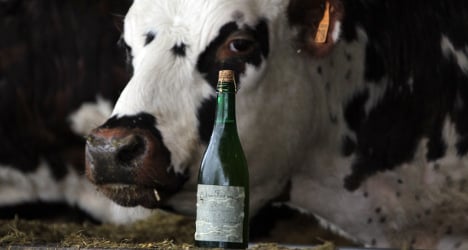 French cows are getting a dose of cider to make them tastier. Photo: Charly Triballeau/AFP

For years the Japanese have been feeding Wagyu cows beer and giving them massages in order to produce the superior Kobé beef steak. Now a French farmer is doing the same, but in a slightly more Gallic Way.

A small subset of the herd at François-Xavier Craquelin’s family farm in the tiny Normandy hamlet of Villequier, northern France have been getting the royal treatment. Peaceful classical music is being piped into the barn, their flanks massaged by electric scrub brushes and the pièce de résistance –  barrels of local, organic apple cider on tap.

"It's an original project but it is coherant and their diet is balanced. There is no GM products used," Craquelin told The Local.

“I give them 150 litres of cider four months before they go to the slaughterhouse. For a cow that weighs almost a tonne, that’s the equivalent of 1.5 litres for a human," the farmer told AFP

The idea of giving booze to cows is not completely unheard of in France. Cattle farmers in France and Spain have been known to feed their cows some of their renowned wine production. But the idea of giving the herd a helping of cider is new.

Serving up buckets of cider is designed to create a more tender morsel of beef. The alcohol is believed to spread fat into the muscular portions of the cow and improve the marbling. The delicate and proper balance between meat and fat is what gives richness and flavour to the beef.

Craquelin, who plans to call the product "boeuf cidré", says it will be the top end of what he produces. He doesn’t plan on raising more than 15 cows at a time on the cider diet, out of the hundred or so on the farm.

Craquelin told The Local that project would remain small scale and the "boeuf cidré" (cider beef) will mainly be sold to local restaurants in the Seine Maritime department.

The first cider steaks should hit the tables of Normandy eateries in March, though due to the limited quantity it’ll all be gone this year by May. Craquelin told The Local he had had contact with the famous urestaurant on the Champs Elysée in Paris, but no orders had yet been taken.

"If Parisians want to taste bouef cidré they need to get in their car and drive up to Normandy," Craquelin said. "It's not far."

Some restaurants were already looking forward to the arrival of the choice cuts.