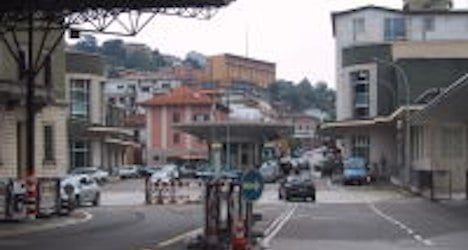 Border crossing at Chiasso, just steps away from the brothel where a customer died. Photo: Peter Berger

The unidentified man, around 40 years old, was a customer at the Sixytnine Café club in the southern town of Chiasso, the Corriere del Ticino newspaper said online.

The man died last Saturday “while being entertained by one of the girls who work at the red-light (club)”, the newspaper said.

Ticino cantonal police confirmed that the customer died from natural causes of a heart attack.

Police said there were no third parties involved and no criminal case to be investigated.

Officers and attendants from the Mendrisio regional ambulance service responded to a call for help but were unable to revive the man, who died on the spot.

Despite the accident, activities at the Sixtynine Café, located just steps away from the Italian border, continued without interruption, the Corriere del Ticino reported.

The newspaper said 25 prostitutes work at the club, which advertises itself to Italian customers by stating that it is just steps away from Swiss customs on the road from Como (Italy) to Chiasso.

Prostitution is legal in Switzerland but it is subject to regulation.

It’s not the first time that a customer has died while in a similar predicament in Ticino.

According to the Corriere del Ticino, seven customers have died in brothels in the canton in the past ten years.

The most recent case previously occurred in January 2010 when a man died in the room of a bordello near Bellinzona.