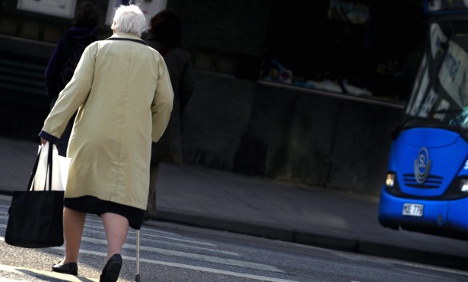 Do YOU help people in need across the street? Photo: Fredrik Persson/TT
This week is Friendly Week (Vänliga veckan) in Sweden. I'm not even kidding. Organized by the Swedish aid agency Läkarmissionen, the seven days are intended to encourage Swedes to be a little more friendly to one another on the roads, at work, at home, and online.
It's a nice idea, sure, but why do they need it? Could it be that Swedes are, dare I say it, unfriendly?
"Swedes aren't better than anyone else when it comes to being friendly… but we're no example either," explains Johan Lilja, the CEO of Läkarmissionen.
It was Lilja's idea to resurrect the event after it died out in 1998. He figured Swedes needed a helping hand, partly because of a recent spate of online hatred in the country, but also because Swedish people typically aren't so openly affable.
"We are more introverted and I think we generally just need to remind each other to take off our sour faces," he adds with a laugh.
Friendly Week began in 1946 after a Stockholm traffic warden reported that out of all the cars that passed him, 12 motorists were smiling, 15 looked "fairly satisfied", and 8,569 looked like they were "going to a funeral".
The agency kicked off the week that same year and it ran uninterrupted until 1998, when fierce competition from Halloween meant that the Friendly Week, which was held at the end of October, was cancelled.
Now that it's back (strategically timed to fall during the same week as Valentine's Day), Lilja says the response has been overwhelming and his phone hasn't stopped ringing.
But why? Is it because Swedes realize they need a kick in the backside to be friendly, or is it because the concept of a specially reserved week to be friendly is just so unusual?
I talked to a bunch of Swedes to find out more, including experts and the friendliest Swede in the country (more on this later), but first, let's examine the word "friendly" so we're all on the same page.
The Merriam Webster dictionary defines it as "acting like a friend", being "kind and helpful", and "showing kindly interest and goodwill". We can rule out that you're friendly with your friends, because that much should be a given.
Friendly means doing kind things to people you don't know. "Doing good for strangers," let's say.
So are Swedes friendly by this definition? I've already concluded in the past that they're not very good at small talk, and that they're more polite when speaking English, but are they friendly?
I took to the streets of Stockholm to ask Swedes what they thought. I also asked them for an example of something friendly they'd done recently.
The response was surprising. One woman told me that Swedish friendliness depends on whether alcohol is involved. A man said Swedes don't dare to be generous, but were born friendly and that it stays inside them somewhere. A British man told me any friendliness from Swedes is an elaborate act for visitors.
IN PICTURES: Stockholmers debate if Swedes are friendly or not
When I posed the question on Twitter the response was huge. The overriding trend was that Swedes considered themselves to be friendly and foreigners disagreed.
An esteemed Swedish ethnologist, Åke Daun, confirms this and adds that it's not in Swedish people's nature to be friendly.
"Many foreign people will say that Swedes aren't friendly because they don't spontaneously talk to people they don't know. You can sit on a train ride from Stockholm to Gothenburg for five hours, very close to someone, and they won't even say hello," he explains.
"It's a contrasting picture in southern Europe, for example, where you can't avoid being invited to a conversation. Both parties find it interesting and they get the feeling that they're alive."
Does that mean Swedes are missing out on the very essence of being alive?
"Swedes have no interest in talking to strangers. They're not into talking to someone they don't know, they want to spend their time talking to someone who shares their own interests," he says.
And he's not a fan of Friendly Week either.
"The whole thing has very little substance, it doesn't generate any more or any better friendliness. The name doesn't mean anything."
So if the expert says Swedes don't talk and the Swedes argue that they're friendly, then what does a bonafide friendly Swede say?
I asked Margaretha Strömberg, who in 1998 became the last-ever Swede to win "Friendliest Swede of the Year". The last friendliest Swede in the world.
"Generally, everyone wants to be friendly, but Swedes can find it hard to show. But I think the Friendly Week is good, though you should really be friendly all year round and not just for one week," she says.
Strömberg, 69, was given the title for her help in Armenia in the aftermath of the 1988 earthquake. The locals named her Armenia's Angel. She didn't stop helping either, and still works with bringing over students and teaching them nursing in Sweden today.
So what is her advice for Swedes when it comes to being friendly?
"You have to be yourself. If you truly wish people well, then you are a friendly person. But you have to mean it."
Well there you have it. The general consensus is that Swedes are friendly, but it's hidden somewhere deep down. So, if you're a Swede reading this, or even if you're not a Swede, do something friendly right now. Smile at Sven from sales. Give someone a compliment. Help that old lady cross the road.
You only have a few days left. Otherwise you'll have to wait until Friendly Week rolls around again next year.
Or will you?
Oliver Gee
Follow Oliver on Twitter