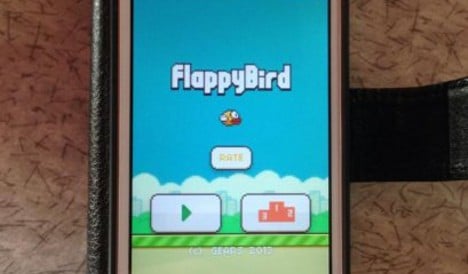 Photo: Anton Jedborn
The game, which was developed by Indie game developer Dong Nguyen, was pulled from all app stores on Sunday after Nguyen said he "couldn't take it anymore".

Players of the addicting game must try to navigate a flapping bird through obstacles without crashing. The game's popularity meant that the people behind the game were pulling in $50,000 a day through ad revenue, Nguyen told the Verve website.
Now that the game is unavailable for download, Swedes have followed a worldwide trend of selling smartphones still containing the app, offering others the chance to play what now could be considered a collector's item.
One Swede, 18-year-old Anton Jedborn, posted an ad on Swedish buy-sell site Blocket for an iPhone 5S, which features the Flappy Bird app.
The asking price? 25,000 kronor ($3,876).
The recommended retail price for an iPhone 5S in Sweden is around 6,300 kronor.
The ad reads: "I'm selling my relatively new iPhone 5S, purchased in December 2013. It even has the unique app Flappy Bird which will take your breath away. It's a brilliant phone, and when you throw in the app you can't go wrong."
"Ah, it was just a fun thing to do. Me and my friends saw that other people were doing it and we thought 'Why not?," Jedborn told The Local.
The Swede couldn't put his finger on why the game had taken off, but said it might have something to do with the fact that it's such a simple concept that's so difficult to master. As yet, Jedborn hasn't had any offers for his phone.
"One guy did call, but he just asked if the price was a typo. Unfortunately for him, it wasn't," he added with a laugh.
Blocket is overflowing with other similar ads for smartphones and tablets featuring the game, with some on sale for as much as 60,000 kronor.
One expert reasoned that the game is not actually worth as much as the eager traders hope, and doubted that the app would become a collector's item.
"I find that hard to believe," Ronny Engström, who works at Nostalgipalatset selling collector toys and games, told the Metro newspaper. "It's nothing concrete, there's nothing there to hold on to."
While it remains largely unclear why the popular game has been removed, it appears the developer is displeased with the attention it has earned him. He tweeted that the move has "nothing to do with legal issues".
The game enjoyed a short life of extremely viral fame. The humorous video (below), which offered the secret to beating the game, collecting over 9 million views in one week.