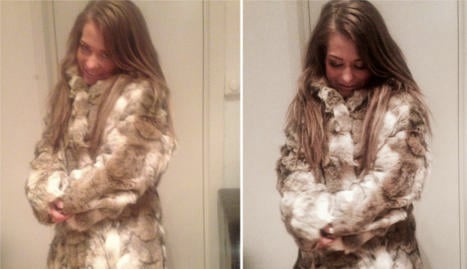 Sandra Borch showing off her wolf fur coat - Photo: Facebook
Sandra Borch, a former youth leader of the Centre Party, posted the picture on her Facebook page on Monday.
"I knew there would be reactions, but I want to show that I do not care," she told VG newspaper, as people began leaving angry comments under the post.
Borch has long argued that farmers in Norway should be given free rein to hunt and kill wolves, arguing that they need to do so to protect their livestock.
Siri Martinsen, the leader of the animal rights organization NOAH attacked Borch for her stunt.
"This initiative is quite predictable for a politician who so strongly advocates the killing of wolves and the use of fur, with all the suffering it inflicts animals," she said.
"She's doing this very clearly to provoke, but I'm pretty sure it does not change the attitude of large sections of the population in Norway who say 'no' to the hunting of wolves and who are critical of the fur industry."
At the start of each hunting season there are normally some 50 wolves in Norway, and by the end there are barely 20.
Normally the difference is made up by wolves immigrating across the border with Sweden.
But with the Progress Party, the junior partner in Norway's new right-wing government, saying it has no objections to the complete eradication of the wolf, this season hunters feel even less constrained than normal.