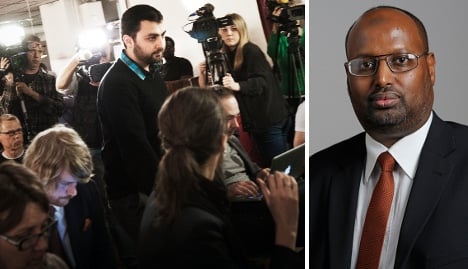 That question, he said at a Stockholm seminar The Local attended on Wednesday, was deliberately provocative in many ways. It presupposed that the half million people in Sweden with roots in the Muslim world were a homogenous group.

Next to him was Social Democrat veteran Bo Ringholm, who had just pulled off the tough task of diversifying Sweden's main opposition party's candidate list for the upcoming elections. Every fourth person had to be younger than 35, and another quarter had to have at least one parent with roots outside the Nordic region. Add to that the age-old Social Democrat tactic of "zipping" their lists according to gender, with every second candidate a man.

Ringholm defended his party's use of quotas, arguing that "identity politics" –  who the politician was as a person – mattered. That term became the focus of much of the ensuing debate, because Timbro and Arpi were looking at the question from a liberal point of view. In other words, they think picking someone for what they are rather than how good they are at something is wrong.

So who represents the Muslim electorate, if there is such at thing?

Arpi's report looked at two prominent Muslim politicians in Sweden. The Moderate MP from Gothenburg, Abdirizak Waberi, and the Social Democrats' former steering committee member Omar Mustafa. Did either of them fill that role? Or neither?

Both men, the report underlined, had served as head of Sweden's Islamic Association (Islamska förbundet), widely regarded as rather purist, or as Social Democrat and Muslim MP Nalin Pekgul once said: "The Islamic Association is an Islamist organization with strong ties to the Muslim Brotherhood in Egypt".

Last year, days after his appointment to the inner circle of his party, Mustafa was booted out. He said his party had thus showed Sweden that it was impossible to combine politics with "representing Muslim civil society" or religious activity in general in Sweden.

Nonsense, responded Pekgul, Sweden's first Muslim MP. She added that no one had any business pretending that Mustafa was any kind of representative of Swedish Muslims as a sort of ill-defined aggregate.

Had he been picked to be some sort of Muslim figurehead on the prow of a pro-diversity party, or to scoop up new voters? Arpi's report failed to tackle that particular question in depth, but insinuated in his fierce critique of "identity politics" that the Social Democrats were perhaps vote fishing.

But if Mustafa had been kicked off the scene for being diffuse about women's and men's rights, as well as having presided over the Islamic Association when it invited speakers accused of rather flagrant anti-Zionism and anti-Semitism, why had Moderate MP Waberi not been asked to leave for saying that men were allowed to hit their wives, that he's open to a state run by sharia laws, and that women and men should not be allowed to be alone in the same room together.

Waberi has said his comments about Islam where taken out of context in a documentary in which he discussed the literal edicts of the Quran.

He also, however, operated a publicly funded, privately managed free school in Gothenburg with a "Muslim focus" that has had problems with Sweden's School Inspectorate (Skolinspektionen) on several points including holding prayers, banning menstruating girls from religious study class, and employing a violent teacher.

Arpi's report offered no concrete insight into why the Gothenburg politician had been allowed by the Moderates to retain his seat in parliament, with the researcher simply saying Waberi was "discreet" and kept a "low profile".

Arpi did note, however, that Waberi got a high number of personal votes in the last elections, coming out on top in an electoral system that allows the Swedish electorate not only to pick a party, but signal its preference for certain candidates. Waberi got more personal votes from his district than the prime minister got from his, Arpi underlined.

"The (Moderate) Party has navigated between respect for its voters, who put a cross next to Waberi's name, and at the same time be clear about its ideologies and policy preferences," Arpi noted.

The report's conclusion, which stretches over two and a half pages, states that both the Social Democrats and Moderates are aware there is a deficit of Muslim politicians in Sweden. While debate remains about the way forward, Arpi offered some thoughts about what both political leaders and Sweden's Muslims might want to bear in mind when pondering the question his report attempted to answer.