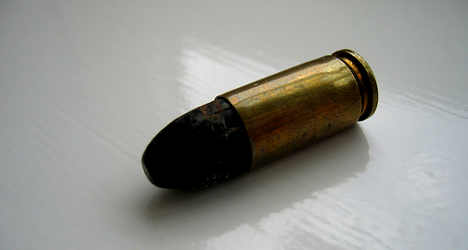 Police are trying to find out where the bullet came from. Photo: William Hook/Flickr

The girl was enjoying her packed lunch in the city of Caserta when she made the discovery, Caserta News reported.

She took the juice and the piece of the bullet to her teacher, who immediately phoned the girl’s parents and the local police.

Having avoided swallowing the bullet, the girl was unhurt but was taken to hospital as a precaution.

Police are now investigating how – and why – a bullet came to be in the juice carton.

While the incident could turn out to be a gross abandonment of health and safety regulation, bullets have in the past been used by Italian criminals as a threat of violence.

Last year a letter thought to contain bullets was sent to Silvio Berlusconi, former prime minister, while similar packages have also been delivered to other key figures such as newspaper editors and Rome’s former city mayor.

Caserta is in Italy’s Campania region, the heartland of the Camorra mafia which inspired the book and film Gomorrah.