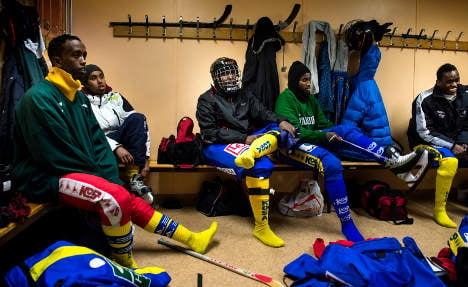 “I am so proud of the guys,” captain Aboi Abdiirahiin told the TT news agency on Monday after the team lost to Germany by 22-1. “But I thought we'd lose by 40-0, or more.”

Borlänge municipality has helped the Somali refugees pick up their clubs, despite the rarity of ice in their home country.

“Soccer is easier,” high school student Ahmed Hussein told the AFP news agency last year as his team began training for their world-cup debut. “Everyone can play football, but ice-skating… It can be learned, of course, but it requires time and patience.”

Leaving war-torn Somalia as a refugee four years ago, the now 18-year-old never imagined life as a bandy player.

Bandy, in which teams of 11 players reach extreme speeds on football pitch-sized ice fields, goes back more than a century, but it has caught on in only a handful of countries. The sport is dominated by A-group nations Sweden and Russia, relegating an ice hockey superpower like Canada to the B group.

On Tuesday, the players took to the ice against Germany, but regardless of result, team captain was delighted that the team of newbies scored just one goal.

“I was so happy that we got that goal, it feels like we can play bandy now,” he told TT.

It all started as an integration project, initiated by team manager Patrik Andersson early this year. He said he and his friends were out on a pub crawl when they began discussing how to work together on the challenges faced by Borlänge, an old industrial town 200 kilometres west of Stockholm.

Key among these challenges was the steady growth of the immigrant population, with the Somali community made up mostly of refugees now numbering 2,000 of a total population of 50,000.

Andersson, recounting how the idea of the bandy team gradually took form, said he thought creating bridges between coexisting cultures “would make Borlänge a good city to live in”.

The vision is whole-heartedly embraced, and partly financed, by the municipal government, which sees the immigrants as an asset that can help counterbalance the gradual ageing of the town's population, according to municipal official Jan-Olof Lundberg.

“On the labour market, there won't be enough labour, so it's very good from that aspect,” Lundberg told AFP.