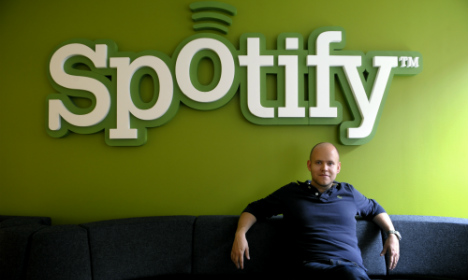 Photo: Janerik Henriksson/TT
It's super positive, the third consecutive year of growth," said Ludwig Werner of the record company trade body IFPI.
Sales of physical discs continue to fall sharply and streaming music has come to dominate the industry, whose revenues grew by 5 percent in 2013 to almost 1 billion kronor ($155 million), although still a fair way to the industry's peak levels in the early 2000s.
"If we see ourselves as the new economy's music industry, it's an industry in growth," said an upbeat Werner.
Spotify has only been in existence a few years but has in that time managed to eat up the lion's share of record sales. Streaming music amounted to some 700 million kronor in revenue in 2013. The exact figures over Spotify's contribution have not been released but the firm is by far the dominant force.
"We do not know exactly how much of the streaming numbers coming from the various streaming services, but we know that there is in principle a dominant player. Spotify has stopped being a brand and become our new format, much like CD or vinyl."
"One might think that there is a problem with a giant supplier, at least if they would stop being the good guys and become the bad guys instead," said Werner.
Spotify don't have it all their own way however and Werner mentioned a number of competing music services which may come to Sweden.
"It's logical. The larger Spotify gets, the more entrepreneurs and businesses will see that there is room in the market for them also. The more profitable an industry is, the more competitors pop up, and I think that's good," he said.
Music Industry researcher Daniel Johansson at Linnaeus University, notes that Spotify's dominance in Sweden does not have an equivalent in other countries. Johansson expressed the belief that competition will also soon have an affect on the firm's dominance.
"The battle for streaming services will get going in earnest in 2014. And those in the best position are those who are not dependent on external capital. Players such as Google, Sony, Microsoft, who have financial muscle and can afford to lose revenue on the music side for a few years… The Swedish market will definitely change,"  Johansson said.