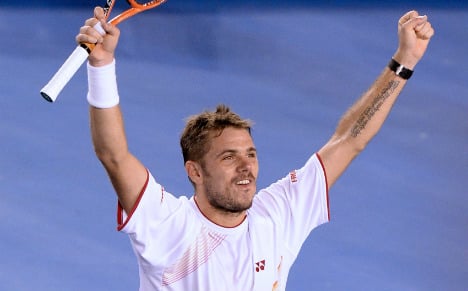 It was the 28-year-old's first Grand Slam final, and even though Nadal was struggling with a back injury he coped admirably with the pressure to take it in four sets.

The win is seen as a major upset as world number one Nadal had until Sunday not dropped a single set in 12 encounters with Wawrinka, who knocked over three-time defending champion Novak Djokovic and world number seven Tomas Berdych to reach the final.

But it was Wawrinka who went out on the front foot, forcing Nadal to drop his serve early in the first set and powering into a two set lead. It was not all plain sailing for the big Swiss however as Nadal fought back to win the third set 6-3.

The win will be particularly painful for Nadal as he was bidding to tie Pete Sampras on 14 major titles. The feat would have made him, at 27 years, the youngest man in history to win 14 Grand Slams, eclipsing Roger Federer's corresponding feat at Roland Garros in 2009 by 66 days.

Adding spice to his achievement is that Wawrinka has supplanted Federer as the number one ranked Swiss player, a position his close friend has occupied since 2001.

Wawrinka's rise from world number 17 at year-end 2012 to three in next week's new rankings stems from his monumental fourth round match with Djokovic at last year's Australian Open, which went 12-10 in the fifth set.

He carried this momentum on to his tight defeat in New York, and his redeeming victory over Djokovic in the quarters this week, before Sunday's breakthrough win.

Tattooed on his left forearm are the words of Irish poet Samuel Beckett: "Ever tried. Ever failed. No matter. Try Again. Fail again. Fail better." And Wawrinka has been a model of perseverance.

"The match against Novak gave me a lot of confidence and showed me that I can play on a very high level in a very important match against one of the bug guys," Wawrinka said.

"After the (2013) semi-final at the US Open I knew that I was close to be there. But it still was far away for me to make a final in a Grand Slam.

"It's tough for me to have as a goal to make the final in a Grand Slam, especially with Novak, Rafa, Roger and Andy (Murray). I knew I had the level to beat the top players, but to be in the final you have to do it again and again."

Wawrinka has always been admired for his artful one-handed backhand but it's his all-round game, also armed with a potent serve and forehand, that has propelled him into Grand Slam contention over the last 18 months.

"I now have more confidence in myself. I know that when I go on court I can beat almost everybody, even on the big stage like in a Grand Slam semi-final," he said.

"It's a lot about confidence, especially with my game that I'm playing quite fast from the baseline, trying to always be aggressive.

"So I take a lot of risks and it's important to be really fresh and relaxed in my head."

That also corresponds with the arrival of Magnus Norman as his coach last April, with the Swede formerly in charge of countryman Robin Söderling, who is the only man to beat clay king Rafael Nadal at the French Open back in 2009.

Wawrinka said he was now in the best form of his career and was better at handling the pressure of the big matches.

"Last year I had the feeling that I was playing better, but I was also dealing better with the pressure," he said.

"I'm enjoying more what I'm doing, when I'm winning, and also maybe I know more how to deal with all the pressure."