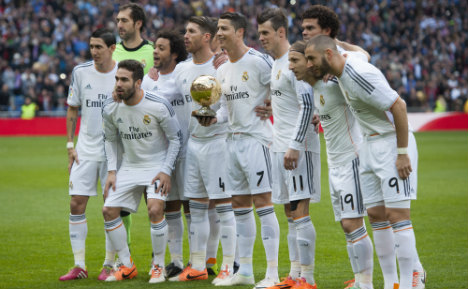 Cristiano Ronaldo opened the scoring on 57 minutes, as set up by Luka Modric, he rifled home his 31st goal of the season.

However, it was not a great afternoon for Gareth Bale as he was on the end of a rough challenge from Jeison Murillo early on and was eventually substituted at half-time.

Madrid lead Barcelona and Atletico Madrid by two points, but both can move back to the top with wins over Malaga and Rayo Vallecano respectively on Sunday.

"Tonight we will sleep better than we have on other Saturdays, but we have to keep fighting because it is not always easy as the first-half today showed," said Real boss Carlo Ancelotti.

And the Italian also allayed fears that Bale would be sidelined for any period of time by the injury that forced him off.

"After the knock he received he didn't feel comfortable. It just disorientated him a little bit and we thought it best to bring him off.

"He will be fine for the next game."

The afternoon started in celebratory mood for the hosts as Ronaldo paraded the Ballon d'Or in front of the home fans.

Ronaldo nearly got off to a blistering start as he cut inside onto his right foot and blasted a shot wide of the target on six minutes.

Bale was then involved in an unfortunate clash with Murillo as the Colombian clattered the Welshman between the legs and was booked.

Manuel Iturra nearly gifted Madrid the opener moments later as he deflected Dani Carvajal's cross onto his own crossbar.

From the resulting corner, Sergio Ramos also should have given Ancelotti's men the lead as he headed over after Roberto had flapped at Angel di Maria's cross.

After a bright start, though, Madrid's intensity dropped and it wasn't until first-half stoppage time that they threatened again as Roberto made a brilliant save to parry Ronaldo's sweetly struck overhead kick.

Bale's unfortunate day continued as he was replaced by Jese Rodriguez at half-time.

Madrid's tempo was immediately lifted by the Spanish under-21 international and Roberto had to be alert to deny early efforts from Di Maria and Modric.

The goal did finally arrive just before the hour mark as Ronaldo worked space for himself inside the area before firing a low left-footed shot beyond Roberto into the far corner.

Roberto did well to prevent Ronaldo doubling his tally with a low drive 10 minutes later and the Portuguese then saw a deflected free-kick come back off the bar.

Madrid finally got the breathing space they craved on 78 minutes when a lovely move involving Ronaldo and Marcelo was finished off by Benzema for his fifth goal in his last six games.

The 34-year-old Portuguese star opened Insparya hair implant centre in the Spanish capital in March even though he has been a Juventus player since last year.

“The Spanish people treated me well, I wanted to thank them by giving them work,” Ronaldo told El Pais newspaper in an article published Friday.

“I know that the people love me, they know that I gave a lot to the club (Real) and that they also gave me a lot.”

Ronaldo, who won two La Liga and four European Champions League titles with Real, said that he hasn't ruled out becoming a coach when his playing days are over but still has his critics to defy.

“I see football as a mission: to be on the field, to win, to improve, I feel extra pressure, people always judge, they say it's over, that I'm 33, 34 or 35, and I should stop,” added the five-time Ballon d'Or winner.