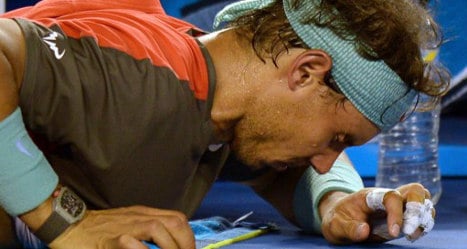 Rafael Nadal of Spain grimaces as a trainer works on his back between games against Stanislas Wawrinka in the men's singles final of the 2014 Australian Open on Sunday. Photo: Greg Wood/AFP

The Swiss, who also upset three-time defending champion Novak Djokovic in the quarter-finals, capped a magnificent fortnight with his 6-3, 6-2, 3-6, 6-3 win over Nadal for his first major title.

"I still think that I'm dreaming. It's a strange feeling," he said.

"I've seen so many finals. I always try to watch the final of Grand Slams because that's where the best players are playing.

He added: "To beat Rafa, even if he was injured, I think I played my best first set during the match. I was ready to play four hours or five to beat Novak in the quarters, to beat Tomas Berdych in the semis."

Wawrinka became the first player since Sergi Bruguera at the 1993 French Open to beat the two top seeds, Nadal and Djokovic.

He said he spoke with his Swedish coach Magnus Norman about playing in a Grand Slam final, and he was surprised how calm he was at the start of the match.

The Swiss got off to a brilliant start, taking his first ever set off Nadal in 12 matches and going a break up in the second before the Spaniard's back problem became apparent.

He went two sets up but lost the third as Nadal threatened a comeback, before stepping up to take the fourth set and the championship.

"I was surprised how well I started the match. In the beginning, he was good, he was fit, he wasn't injured. And I was playing amazing tennis.

"Then there was the second part of the match where I had to stay calm and just to try to stay aggressive because he was injured, but he was still trying a little bit.

"It was not easy. I started to be really nervous because I started to realise that I could win a Grand Slam. But at the end I just came back to the game and focused on what I wanted to do."

Adding spice to his achievement is that Wawrinka has supplanted Federer as the number one ranked Swiss player, a position his close friend has occupied since 2001.

Wawrinka's rise from world number 17 at year-end 2012 to three stems from his monumental fourth round match with Djokovic at last year's Australian Open, which went 12-10 in the fifth set.

He carried this momentum on to his tight defeat in New York, and his redeeming victory over Djokovic in the quarters this week, before Sunday's breakthrough win. 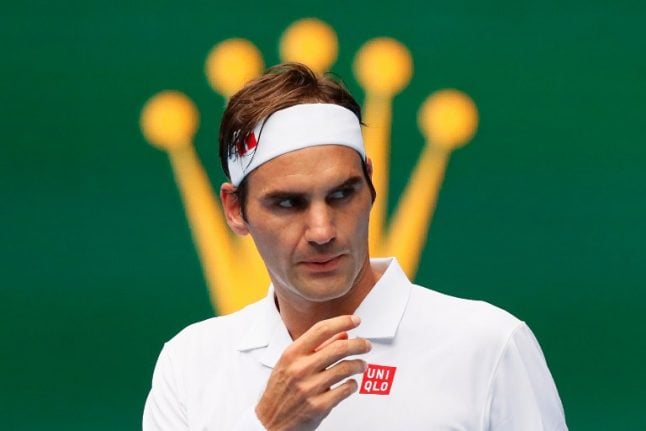 "Playing a player like Dan Evans is like facing myself," the 37-year-old Federer said after his match against the Brit. Photo: AFP

The 20-time Grand Slam champion, who is gunning for a record seventh Melbourne Park title and third in a row, admitted he had been given an unusual challenge by the 28-year-old, who plays a similar style of tennis.

“It feels like playing a mirror a little bit. That was my mindset heading into it — how would I play myself potentially?”

Evans, whose ranking plummeted from a career-high 41 after he was slapped with a year-long ban for testing positive to cocaine in April 2017, played almost flawless tennis to stave off a set point on his way to forcing a first set tie-break.

He even had the temerity to lead 5-3 in the breaker before Federer stepped up a gear and reeled off the next four points to secure the set with a cry of “Come on!”.

“It always helps when you sneak a break in the first set,” said the Swiss star after a ding-dong contest lasting 2hr 35min. “The match might have been different.”

Federer said he had expected Evans to cause him more problems than when he cruised through their previous Grand Slam meeting at Wimbledon in 2016 for the loss of just eight games.

“I have high regard, you know, in Dan. I think he's a good player. I've seen him play some really good matches over the years, I see why he can cause difficulties,” he said.

“He's got a nice slice, defending the court well. He has the variation, which is always a hard thing to play against.

“He was very sort of cat and mouse. I liked the match. It was enjoyable.”

The loss of the first set after exactly an hour was harsh on Evans who had committed only two unforced errors and constantly put the third seed under pressure with his scampering, attacking game and flurry of winners off both wings.

The plucky Evans, who had covered acres of ground and found the lines unerringly, needed treatment for blisters on both feet before the second set started and immediately was broken.

But he refused to lie down and broke back as Federer served for the set to force another tie-break.

“I thought I might have pulled away midway through the second set,” added Federer. “But I couldn't, to his credit. He played well.”

The Swiss great hasn't often needed luck during his unparalleled career but he took advantage of some in the third set to finally ease the pressure.

Holding break point at 2-1, he barely scooped up a half-volley which grabbed the net cord and toppled over forcing Evans to go long.

A service game to love followed to put Federer 4-1 up and the brave resistance of Evans was finally broken.

The veteran will play unseeded American Taylor Fritz in the last 32.