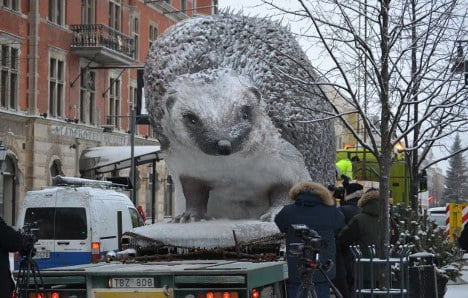 A 12-tonne hedgehog made of ice and snow makes its way through the streets of Luleå. Photo: Andreas Johansson

Every winter for the last 29 years, Englund, 57, has added a dash of brightness and fun during the darkest days of the year.

And this winter was no exception, as Englund was on hand at the city's bustling Stadsparken park for the much-anticipated unveiling of Luleå's "ice animal" on Tuesday.

As crowds of onlookers and journalists looked on, Iris the hedgehog, Englund's 12-tonne, snow and ice creation, was wheeled into place.

"There were more journalists and photographers there this year," he tells The Local.

"I never imagined it would become so popular."

"He wanted there to be something fun to do in the winter. We had seen postcards where someone had pasted an image of a polar bear in front of a picture of the city. Of course, there aren't any polar bears around here, but there was something about the image that we liked," Englund recalls.

But constructing a massive ice sculpture of local fauna wasn't enough, he explains.

"We thought it should also serve some sort of function; that it could be something people could use rather than just look at. So we decided to make the sculpture into a slide for kids," he says.

Indeed, the backs of Englund's sculptures have a small track carved out that allows young children to slide down like wannabe Olympic lugers.

"It's extremely popular. Last year we measured that about 60,000 rides had been taken," he says.

IN PICTURES: Sweden's 'coolest' concert: an igloo full of instruments made of ice

So far, deciding on what animal to sculpt has been "pretty easy" for Englund, who this year worked with a team of three others to create the massive hedgehog "in about a week", although work was delayed by several weeks due to the mild winter weather.

"We want the animal to be part of the local fauna, nothing crazy like an elephant or something like that. One year, we had a domesticated pig, though, so there is some variation," he says with a chuckle.

All the sculptures are made from a mixture of ice and snow, and then painted to make them "as realistic as possible". Sometimes foam or plastic is used to add additional detail. Iris the hedgehog, for example, has eyes and a nose made of styrofoam.

"To get the spines on her back, I cut and sanded about 60 broomsticks," says Englund.

Other animals sculpted by Englund that have graced Luleå's Stadsparken include a frog, a woodpecker, an otter, a wolverine, and of course, an elk.

"It's hard to say, but I guess it was a family of reindeer. There was a mother and two calves. I was really proud of the detail. They were just really nice," he says in recalling the 2006 ice animal.

Being "current" or in the news is part of the criteria for being chosen as the Luleå ice animal, Englund explains.

"There were some articles written last year explaining that hedgehog populations had been decimated in several parts of the country, so it seemed like an appropriate choice," he says.

Looking ahead to next year, which will mark 30 years of Luleå ice animal sculptures, Englund is careful not to let anything slip about what is the town's best kept secret every year.

"I'm sure we'll do something extra special next year, but we're not sure exactly what," he said.

"Well, we made models of two animals this year: the hedgehog and one more. Who knows, maybe that other animal might make an appearance next year," says Englund.