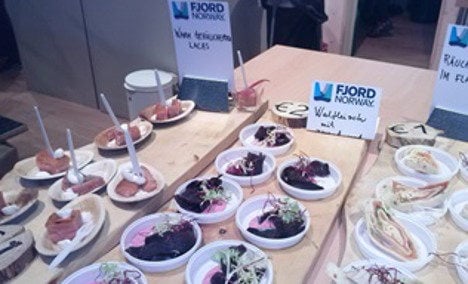 The meat on sale illegally at Green Week. Photo: WDC
Custom officers came away with three kilos worth of Minke whale meat from a Norwegian stand at the event, after being tipped off by the Whale and Dolphin Conservation group (WDC) and the BZ newspaper.
Selling whale meat is banned in Germany, but Norway is one of the only countries in the world where it is allowed.
It appears the stand owners did not know this when they began offering the €2-snacks on Monday, served with a blueberry dip. “We are surprised that selling it is illegal here,” stand manager Arne Andreas Rød told the BZ newspaper.
Two hours after the WDC and BZ visited the stall, customs officials closed it down.
The case has been taken on by the state prosecutor's office who said that they were looking into an incident of “import, export, and sale” of meat.
If charged, the retailers could face a fine and imprisonment of up to five years.
Whale protection activists criticized the sale. “Norway has broken numerous laws,” said Astrid Fuchs from the WDC.
"We have good laws in Europe to protect whales and dolphin, but often lack implementing them."
She told The Local: "I was really surprised to find it on sale. The environment ministry couldn't believe it either. It is really a scandal because people shouldn't be able to bring it through customs."
Green Week takes place each year in Berlin and attracts tens of thousands of visitors.