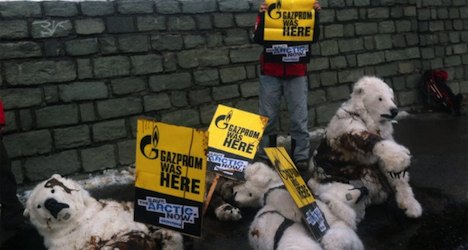 At an "award ceremony" on the sidelines of the annual gathering of the global elite in Davos, the Swiss chapter of Greenpeace and the Berne Declaration said Gap had won the jury prize, while Gazprom had been chosen by online voters for the public award.

The activists attacked Gap for failing to sign up to a safety accord struck in the wake of a factory fire in Bangladesh that killed 1,127 people.

"International brands sourcing from Bangladesh such as Gap have failed to ensure that their suppliers comply with even the most basic safety standards mandated by local law," they said in a statement.

A host of retailers agreed to hold independent building and fire safety inspections in Bangladesh and pay for factory repairs if necessary.

US groups Walmart and Gap, however, opted to stick to self-regulation and snubbed the accord, sparking anger.

Walmart has pledged to inspect its 279 Bangladeshi suppliers and publish the results, while Gap underlines that it has already launched its own safety drive.

The other company under attack was Gazprom for its drilling for oil in the Arctic Barents Sea.

They said that Gazprom would not be in a position to deal with a potential oil spill in the area.

"Such a spill would lead to serious, long-term pollution of their fragile region," the activists said.

Thirty foreign and Russian activists were detained in September after protesting at Gazprom's drilling, before being bailed and then winning a Kremlin-backed amnesty.

Contacted by AFP, Gazprom declined to comment while Gap was not immediately available for a response.

The groups have carried out the "naming and shaming awards" at the annual gathering of the world's political and business elite in the Swiss ski resort of Davos since 2000.

"We have to make sure that our economic model is in line with our values systems and prevent it being dictated by the market," Czech economist Tomas Sedlacek told reporters at the awards.

"The Public Eye Awards remind us of our lost morality,"