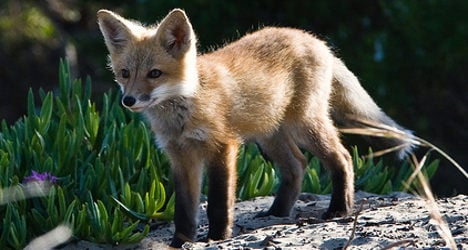 File photo of a cute fox, perhaps not quite as lovable as Zouzou. Photo: Mike Baird/Flickr

The saga of the little fox, named Zouzou, had made headlines in France and even prompted a support page on Facebook after the Delanes family was ordered to hand over the animal and pay a 300-euro ($409) fine.

In France, raising a wild animal without special authorisation is against the law.

The National Office of Hunting and Wild Animals found out about Zouzou and began legal proceedings against its keepers back in 2011.

But Anne-Paul Delanes told AFP the family had just "received a special authorisation permitting us to keep Zouzou until his death," from the local prefecture in France's southwestern Dordogne region.

Anne-Paul and her husband Didier had earlier paid the fine and then kept Zouzou hidden for fear the authorities might confiscate their pet.

"He is more affectionate than a dog," Anne-Paul Delanes told AFP. "When he sees us, he rolls on the ground and yelps with joy."

Didier Delanes had found the cub in 2010 along the side of the road lying under its dead mother, which had been run over by a car. He took the fox home and the family raised it as a pet.

Zouzou will be four years old in March.