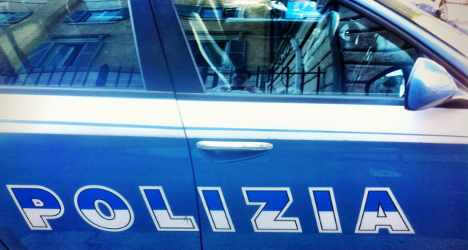 The driver was charged for being drunk while driving and resisting a policeman. Photo: Rosie Scammell/The Local

The incident occurred in Reana del Rojale, a small town in Udine in North East Italy, when a police patrol car stopped the driver, who has been named as Roberto Domini, 49, for a routine check.

According to the daily newspaper, Il Messaggero, it soon became apparent he had been drinking, and so he was asked to take a test to determine the level of alcohol in his system.

Following two tests, which both resulted in a positive result, it seems that Domini panicked. He reportedly asked to look at the results, took them from the officer's hand, causing a minor injury, tore up the papers and ate them – presumably hoping to destroy the evidence.

Domini has been arrested for resistance to a public official, and was also the charged for driving while drunk.

In the latest incident, a 26-year-old Spanish man was fined 450 euros after taking a dip in the Trevi Fountain in the early hours of Sunday morning.

Rome’s city police apprehended and fined the man after he was spotted swimming in the 18th-century monument at around 5am, according to local media reports.

Every summer, hapless foreign visitors face fines of hundreds of euros after falling foul of Rome’s strict ban on taking a dip in public fountains – with the city mayor warning tourists that the centuries-old Baroque monuments are “not swimming pools”.

In April, two Dutch tourists also faced fines totalling over €1,000 after their own ill-advised splash in the Trevi Fountain.

The Roman landmark is one of the city’s main magnets for badly-behaved visitors, but tourists have also been fined after cooling off in the Santa Maria fountain in Trastevere, believed to be the city’s oldest.

Since 2018, anyone caught misbehaving at Rome’s monuments can also face a temporary ‘Daspo’ ban from the area – similar to an ASBO (anti-social behaviour order) in the UK – which allows city police to restrict the movement of people they deem a threat to public order.

But a plan to erect a one-metre-high glass and steel barrier around the Trevi fountain to protect it from unruly visitors now appears to have been abandoned after arts and heritage experts called the idea “foolish”.

Fines for swimming in the fountains have been in place since 2015, but this hasn’t stopped determined visitors from recreating scenes from La Dolce Vita and even some locals from taking a dip – – with or without their clothes.

Swimming in the wrong place is just one of the offences regularly committed by visitors, with graffiti and vandalism a common problem at many of Italy’s famous monuments.

READ ALSO: 15 strange ways to get into trouble on holiday in Italy

In Rome alone, this year tourists have made headlines for everything from breaking into the Colosseum to enjoy a drink with a view to driving a car down the Spanish Steps.

Other Italian tourism hotspots, including Florence and Venice, also have varying local rules in place aimed at curbing rowdy behaviour.